Where Did Those Carrots Come From?

Gardeners across the world proudly bring freshly picked vegetables and fruits into the kitchen. They’re lucky to have an amazing array of delicious plants to grow and enjoy.   It wasn’t always that way.

Consider Native Americans. Prior to Columbus, many lived in cities and big towns surrounded by gardens and farm fields. They grew corn, beans, and a diversity of squash and pumpkins, but they knew nothing of many of today’s common vegetables.  Residents of Asia, Africa, Europe, and Australia back then also farmed and gardened, but their crop choices were limited. 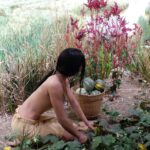 Many foods were cultivated by indigenous people. 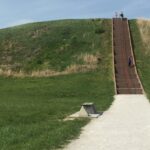 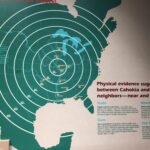 It changed quickly following what’s called the Great Columbian Exchange. Shortly after Columbus set foot on Hispaniola people began deliberately and purposefully moving plants and animals around the world. Many were valuable and diversified the food chain on all continents. Others quickly became pests………most weeds infesting American gardens originated in the Old World.

It went both ways. Today’s gardeners enjoy vegetables originating all over the globe.  Here’s a brief list of where common foods came from:

NATIVE OF THE NEW WORLD 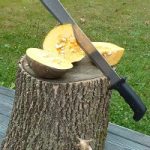 A machete is useful in cutting squash. 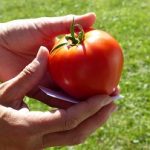 The sweetness of summer’s bounty. 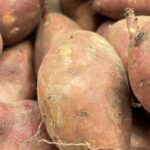 NATIVE OF EUROPE, ASIA, and AFRICA

The Columbian exchange also included grains and fruit. Corn is American but wheat, barley, rye, and oats are from the Old World.  Apples, peaches, pears, and cherries (except for the bitter American black cherry) are also Old World.  Brambles and strawberries apparently lived in both the Old and New Worlds prior to Columbus. Grapes eaten fresh and used for juice and wine came from the Old World but several species also are native to the Americas. 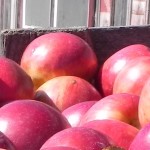 A favorite fall harvest is apples. 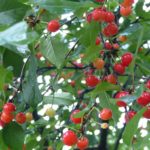 Thanks to the movement of useful plants gardeners worldwide enjoy a diversity of plants to grow and eat.

We love watching frolicking squirrels in our yard and every year we buy bags of corn for them to snack on. We draw the line when they climb up to feeders and gobble expensive seeds meant for chickadees, nuthatches, and woodpeckers.

Bird feeder companies all tout their “squirrel proof” feeders and a homeowner can spend a bundle on different feeders just to slow the flow of seed from feeder to squirrels’ mouths. Some preventions work better than others but a reliable company is Droll Yankee.

But, being partly of Yankee stock, we took the economical route. To thwart the hungry mammals we mounted our feeders on steel pipes and even ringed some with metal stove pipe. Somehow they managed to dig claws into the metal, climb and feast on expensive seed.

Then we discovered spray grease. It’s sold in hardware stores and is meant to spray on drawer slides, hinges, and other balky metal parts. We sprayed it on the metal pipes holding up the feeders. Squirrels gingerly put their feet on the pipe and backed off as soon as they felt the grease. It works.

Spray grease only lasts a few weeks and needs to be reapplied, but it is a simple way to discourage squirrels from climbing to feeders. 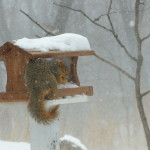 Even in the teeth of a storm, squirrels feast to tide them over. 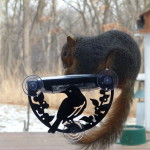 Boldly the fox squirrel hunkered down at the window feeder. 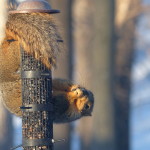 Quite the acrobat, this squirrel hung for more than 30 minutes eating seed. 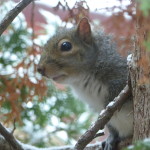 A cautious squirrel scoping out the action. 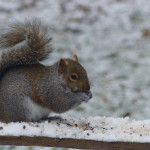 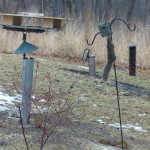 Squirrels have an amazing ability to climb just about any vertical pole. 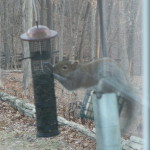 This squirrel learned to climb the metal deflector pole and reached into the hanging feeder. 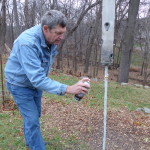 This grease works for a while. Remember to re-apply.

Corn is one of the world’s most important agricultural plants. It’s loved by both people and wildlife. Corn is readily available and inexpensive. When used appropriately, it is an outstanding addition to a backyard feeding station.

It’s surprising how little most people know about its history. Corn is a human created plant that does not exist in the wild. It has no ability to reproduce on its own, and without people planting and tending it, corn would become extinct.

Wheat, oats, rye, millet, rice and barley originated in the Old World. In contrast corn is New World. Domesticated from a wild ancestor in Central or South America thousands of years ago, corn cultivation gradually spread north and east as Native Americans traded seeds. The Spanish conquistadors named it “maíz” from the Taino Caribbean culture whose people called it “mahiz.”  By the time of Columbus, corn was an important human food throughout what became the United States. Early European explorers brought seeds back to Europe and it was soon grown around the world. Today China is a major corn grower but the production epicenter is the American Corn Belt. Billions of bushels are grown in Iowa, Illinois, and Indiana, but cornfields can be found in nearly all states.

Geneticists have developed dozens of corn varieties. Best known may be the delicious sweet corn enjoyed at summer picnics or as popcorn at the movies. It is a major ingredient in livestock feed, and most corn is indirectly eaten as beef, eggs, poultry, pork, and even domestic catfish. Corn derived ethanol powers vehicles and it is used to produce syrup to sweeten beverages and has hundreds of industrial applications.

Corn is an outstanding wildlife food. Gardener’s know! Keeping deer, birds, and raccoons out of a patch of sweet corn is a major challenge.

Corn is readily available for wildlife feeding in grocery, farm and bird feeding specialty stores. It’s usually less expensive at farm stores and can be purchased either as whole (sometimes called shell), dried on the cob or cracked. The shell corn name comes from the Native American practice of using a clam shell to scrape hard kernels off the cob. Shell corn is intact kernels too large for most songbirds to swallow but eagerly eaten by deer, wild turkeys, blue jays, squirrels, pheasants and many other species. Cracked corn has been run through a machine that breaks the kernel into pieces small enough to be eaten by tiny birds as well as all those that can eat the full sized grain.

Corn is not the best choice for the most desired feeder birds. Chickadees, finches, cardinals and many others prefer sunflower seed. Corn’s advantages are its low cost and attractiveness to English sparrows, pigeons, starlings and other less desirable species. These birds prefer to eat on the ground. At Winding Pathways we sprinkle cracked corn on the lawn a distance from the sunflower stocked feeders. It helps lure less desirable birds away from the more expensive seeds. Almost daily a flock of wild turkeys visits the yard and devour every scrap of corn.

Squirrels and deer also love corn and readily gobble it down. It’s sometimes possible to buy dried corn still on the cob and many people enjoy watching mammals chew the kernels cobs.