The August 10 derecho changed Cedar Rapids, and Winding Pathways wasn’t spared.   We lost 47 of our 53 large trees during the 40-minute windstorm. It greatly altered our restoration plans. Here’s what we did or plan to do in response to the loss of trees. 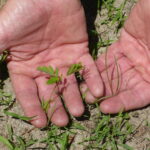 New prairie plot:  We planted this in early May. As expected, we only saw a glimpse of prairie plants in its first growing season, although early prairie plants give us promise that many more will appear next year.  We will try to burn it either this fall or early next spring.

The derecho helped the prairie by felling or breaking four Douglas firs, one black oak, and one green ash. Two of these trees cast some morning shade on the prairie. The rest shaded it some in the late afternoon. They’re gone, so the site will enjoy more sunshine, and prairie loves sun. We mourned the tree loss but the prairie will benefit.

The trees didn’t go easily. Several tumbled into the prairie. They were big and filled with branches, leaves, and needles. We prioritized removing them. Many chainsaw and brush hauling hours later we had the trees moved into a big brush pile in the back. The sun now shines on the prairie planting. We’ll keep you posted. 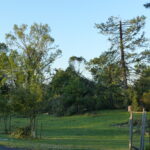 The firs and oak smothered the emerging prairie. 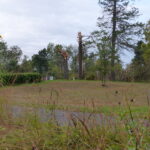 The firs shaded the prairie. Now more sun will shine.

After we cleared fallen trees from the prairie, we turned to many trees that tumbled down on the north and east ends of our land. It’s taken hours to cut shattered trees and cut pathways through fallen logs so we can walk our own land easily. This land was once shady.  Now the sun hits the ground. The storm transitioned the land from dense forest to savanna – a landscape of occasional trees and rich plant growth hugging the ground. Wildlife will transition as the habitat changes. Because of this change in the forest, some bird species may decline temporarily and others will thrive.

We didn’t lose all our forest trees. Just most of them. The loss of shade creates opportunities for ground-hugging plants to thrive, including baby trees. We’re already found some tiny black raspberry plants growing and many oak and hackberry seedlings.

To make sure that appropriate native savanna plants establish in the now sunny areas we ordered a native seed mix from Pheasants Forever that we’ll plant this fall.

We will keep you posted on changes in our prairies and new savanna.

Early this spring we sat on our front porch staring at needed work and a home dilemma.

Our front porch and back deck were enclosed in traditional wood railings and balusters. About every other year the paint peeled. Scraping and repainting were tedious and time consuming chores that we didn’t want to do repeatedly. Also, each side of our home offers gorgeous views of oaks, maples, and a prairie plus the wildlife that visits our feeders and yard. From indoors, seeing through the heavy wood balusters and rails was hard.

Instead of scraping and repainting again, we paid a visit to Ogden and Adams, our neighborhood home store, and ordered an aluminum railing system for the front porch and a cable rail for the back deck. Then we ripped out the wood and installed the new porch railings ourselves.  We’re not carpenters so we watched installation videos and read the instructions that came with the materials. It took time figuring, cutting and assembling, but we were able to successfully install the railings ourselves.  And once in place we were delighted with their appearance and the amazing ability to see into the yard.  These products are carried by most major lumberyards and home stores.

After installation. Easy to see through.

The white aluminum rails and balusters should eliminate all future need to scrape and paint, but even better is the increased visibility they offer. The old balusters were 1 ½ inches across, while the aluminum ones are but 3/4ths of an inch. That may not sound like much but  the front porch has nearly 60 balusters, meaning that we now have about 40 more inches of clear unobstructed vision. Essentially the new ones offer only half the visual blockage of the old wood ones. This lets more light enter the house and more cool breeze to waft through on hot summer days.  From the road the difference is indiscernible. The impact of the cable system on the back deck is even more dramatic. The tightly stretched stainless steel cables are nearly invisible and are remarkably easy to see through. When we peer at our bird feeder our eyes focus in the distance and the nearer cables become a mere shadow.

We’re delighted with our new railings. Safe, low maintenance, attractive, and easy to see through!

Clearing the Path While Creating a New Habit(at)

Clambering over the fallen branches of the cleared understory saplings, I realized I was pushing my way through a metaphor.

Recently, a dynamic work party gathered at Sand Ridge to access Faulkes Woods and begin rehabilitation of the diverse ecosystems that had inspired the dedication of this lovely preserve.

The prolific deer and turkey populations foraged in neighboring yards and gardens more frequently. Woodpeckers, finding the dying and dead trees just right for their food and shelter needs, had increased. Yet, other birds, such as the Ovenbird, that are typically found in large timber tracts seemed to have disappeared. According to the Cornell Laboratory of Ornithology under Habitat “Ovenbirds breed in large, mature broadleaf or mixed forests from the Mid-Atlantic states to northeastern British Columbia. They set up summer territories where the leaf canopy overhead inhibits underbrush and provides deep leaf litter hosting plenty of invertebrates.” This excerpt can explain why they are not around. Too much undesirable understory has prevented native plants from growing and leaf litter is practically non-existent. Erosion has increased.

The clearing out “work party” left the forest floor in shambles. At least that would be the first impression. Piles of barberry littered the bare forest floor. But, the rest of the area was free from large patches of impenetrable brush. The felled saplings were another story. Not only were they tough to climb over and push through, but also, they blocked the trail. So, newcomers to the forest could not tell if they were on the right path back to the house for lunch. Thank goodness for the bright orange marker tapes that the leaders had tied to trees along the way to point the way!

And, that is not all. This project has been in development for a number of months. Leadership centered on a core of reliable professionals from the City of Marion, Trees Forever, Iowa Natural Heritage Foundation, and Winding Pathways. Each knew his/her role. Everyone contributed positively. Volunteers, some experienced and some new to the efforts of ecological restoration, followed the lead of the crew chiefs. The project was successful because everyone made it so. And, deferred to experienced leaders.

All this hit me as I navigated the timbered jackstraw.

In short, a steady, decades-long and then rapid decline in quality with a huge mess to clean up.

So, the metaphor that popped into my mind as my way opened and the house loomed high on the ridge before me – still uphill – was, “This is a lot like church.”

Lacking regular attention to details over decades – finances, maintenance, staff and communications – and without a person truly “in charge” as a CEO by whatever name one gives this position, a church congregation can find itself overwhelmed by “garlic mustard, barberry, and invasive understory.” At a certain point a major “clearing out” needs to happen. But, it is messy, has far ranging consequences, hurts many people directly and indirectly involved, drives off productive families and may not be successful if it is only a superficial or “one time effort.”

The cultivation of steady maintenance and care of the physical plant, to social interactions, to nurturing of the tenets and principles to which a congregation espouses and spiritual development is necessary. Both professionals and volunteers need to participate. But, above all, someone must be in charge. And keep at it!

Finally, I pushed through the last of the maple branches and hiked up the trail to the house, washed up and prepared lunch for 27 wonderful volunteers and professionals who made a significant dent in stopping the woods’ degradation. Knowing that this was just the start of restoration, Rich has gone down periodically to trim back the branches from the fallen understory, the deer have eaten them back, the trail is open into the Woods and sunlight is beaming down onto the soil, warming it and the resting native ephemerals. The best part is that the Parks Department of Marion is very interested in the long term health of the Woods and that the sponsoring organizations’ leaders want to do more projects there.

The goals are clear and energy remains high. This is what restoration is about. May it be so in the church as well.