Are You in a Knot Over Japanese Knotweed?

Sometimes the best of intentions turn into a nightmare. A plant down the road from Winding Pathways is proof. 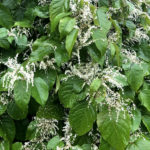 Beware the beauty of Japanese Knotweed.

In the 1840s Philipp Franz von Siebold was in Nagasaki, Japan, and believed a common native plant was so useful and interesting that it should be shared with the world. He shipped cuttings to the Netherlands. The plant thrived and soon gardeners were planting it because of its attractive reddish young leaves, hollow stems somewhat like bamboo, and its showy white flowers that bloom in September. Young shoots are even edible somewhat like asparagus in early spring.

Von Siebold thought he was doing a good thing by bringing this plant to Europe, but soon gardeners realized it was a rapidly spreading monster that crowded out more valuable vegetation. The World Conservation Union calls it one of the worst of the invasives.

It arrived in the United States in the late 1800s as a desirable garden plant, and soon it was found wild in at least 39 states. It’s an invasive problem in England, New Zealand, the United States, and many other countries. 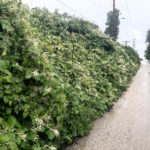 Japanese knotweed forms colonies so dense they crowd out all other plants. Rhizomes spread horizontally under the soil surface and soon new plants pop up from them.  Early spring shoots have a reddish cast. Leaves are triangular, and the plants quickly grow to four or five feet tall. They are amazingly abundant along streams and lakes. In Iowa, we often see them along roads. They are especially easy to spot when their showy white blooms form in late August and continue into September.

Knotweed is an edible plant in early spring, but anyone with a garden or natural area should be cautious about bringing it home. Drop a node on the ground and it will soon sprout and grow and grow and spread and spread.

Once established Knotweed is hard to control, although continuous mowing should knock it back. It’s something to keep out of the yard, and so far, we’ve been successful at Winding Pathways.