What Do You Do When a Chicken Dies? 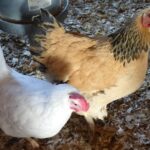 Even healthy-looking chickens can die suddenly.

Our chickens aren’t really pets. We don’t give them names and every once in a while, we sell or give away a few. Even so, we get attached to our hens as we recognize their individual personalities and enjoy their antics.

Maybe it’s silly but we feel sad when one dies. That happened recently when we went into our coop to find one of our Buff Brahmas moping. She was huddled in a corner crouched down into the sawdust litter. The next morning, she was dead.

We carefully examined her and learned she was well fleshed and had no obvious signs of either disease or injury. We’ll never know what caused her untimely death but over the years we’ve developed a procedure we use when a chicken dies. Here’s what we do:

We’re careful to protect our flock from disease and practice bio sanitation. Isolation is the best way to keep disease at bay, so we rarely introduce an outside bird to the flock. Because we don’t want to introduce disease, we change clothes and wash up after visiting another flock and before going to our chickens.

Remember to always wash carefully after handling chickens, eggs, feed, or even visiting the coop.

Given nutritious food, protection from dampness and drafts, and practicing biosecurity makes it likely that a backyard flock will stay disease-free, but occasionally a chicken dies.  Yup, it’s always sad and it’s part of keeping a flock. 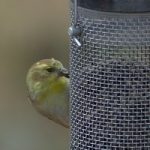 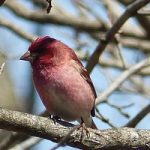 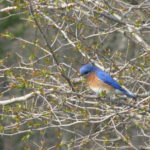 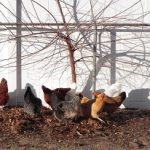 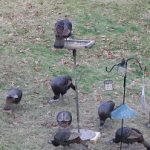 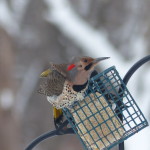 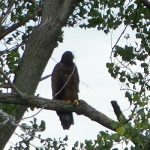 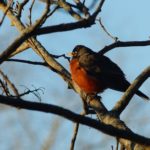 Chickens Are No Dumb Clucks! 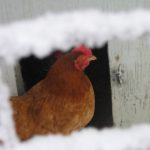 Hens are not dumb clucks!

We were surprised to look out the window on Veteran’s Day morning to see nearly six inches of snow outside. The predicted snow skiff turned into a dump, and we soon fired up the snowblower and put the shovels to use. This much snow in early November is unusual.

Just before we started shoveling, our chickens demonstrated their amazing ability to learn and remember. Every morning we open the pop hole door, and the hens zoom outside with enthusiasm to discover tasty bugs and weed seeds to eat. When we opened the door after the snow, our older hens peered out the door, turned around, and decided the cracked corn we scattered inside the coop was a fine breakfast. They’d remembered snow from last year and knew walking in it yielded cold toes and legs.

Most of our hens are newbies, hatched in mid-July. They’d never seen snow, and when we opened the pop hole door they roared outside, stood perplexed, walked around for a few minutes, and then came right back inside. And, the rooster sang his call from inside. No doubt their toes were cold.

Chickens are often considered witless animals lacking even a shred of intelligence.  We know otherwise. Remembering snow proved that our old hens had learned what it was last winter and remembered their cold toe experience over the eight long months since the last frozen white stuff melted. Chickens are no dumb clucks. 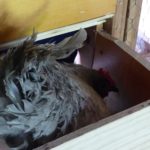 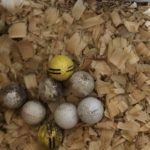 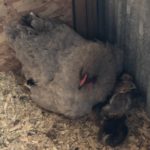 How to Encourage a Broody Hen

We like our small flock of hens and the delicious eggs they give us each day. Although a hen can live for ten or a dozen years her laying slows after two or three years. After that, it declines steeply. Eventually, she might only lay an egg or two a year!

To keep a steady supply of eggs for the kitchen we need to occasionally replace old hens with younger ones, and we’ve learned a trick that works well. We enlist the help of a broody hen.

When a hen develops a mothering instinct she’ll stop laying, puff up her feathers, and change her vocabulary.  She’s broody. Then she’ll sit and sit on eggs, hoping they’ll magically transform into baby chicks. We don’t have a rooster so the eggs are infertile. She can sit for eternity and they’ll never hatch. So we use a trick to help her have a happy motherhood and produce new replacement egg layers. Here’s what we do:

When a hen begins sitting we put a half dozen golf balls in an extra nest that we keep in storage. We put the broody hen and her nest isolated from the other hens in a separate coop. Usually, she quickly settles down and keeps those golf balls comfortably warm.

After she’s been sitting for a couple of weeks we buy chicks from a nearby farm store or hatchery. When darkness descends we enter the coop with the chicks and gently place them under the broody. She immediately senses that her golf balls have hatched and adopts the babies. Her clucking vocabulary changes and she’ll keep her babies warm. The following morning she’ll lead her chicks out of the nest and begin teaching them how to find food and stay safe. 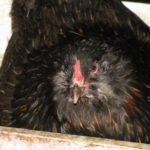 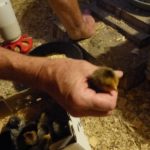 After dark, slip chicks under the mama hen. 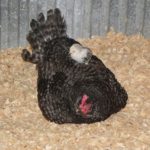 Chick on mama hen’s back

It always amazes us how quickly the broody changes from the trancelike incubation phase to active motherhood. We keep the chicks and their mom separate from the other adult chickens for six or seven weeks until they’ve grown quite a bit and then intermingle them.

There are several ways to dispose of elderly hens. One is to transition them into stewing chickens, but most people don’t want to kill their hard-working hens. A less lethal way is to advertise them for sale at a bargain price on a social media list. Usually, they’ll be sold within a few days.  Four to five months after hatching, our new pullets will lay their first egg. 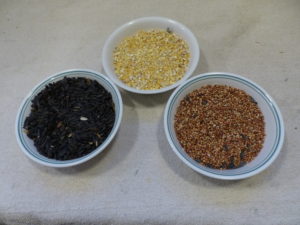 We recently bought a bag of cheap wild bird seed. It contained mostly milo with some sunflower, cracked corn, and millet mixed in. We should have known better but dumped a scoop of it on top of our platform feeder at Winding Pathways and watched what happened.

Birds swooped right in. Cardinals, chickadees, nuthatches, and even a cardinal. They were joined by red-headed woodpeckers. The birds quickly devoured the sunflower seeds, then the corn, and finally the millet. They left the milo untouched.

Birds don’t like milo. Sure, they’ll eat it if they are hungry and there’s nothing else available, but they often leave it uneaten.

Milo is a type of sorghum grown in places too arid for corn. Its seeds are round, reddish, and about the size of a BB. The less expensive a bird seed blend is the more likely it is to have a high percent milo seed.

The very best all-around seed for feeding a diversity of seed-eating birds is black oil sunflower.  Many birds like cracked corn, which is inexpensive. Ground feeding birds like doves and juncos love millet, but they just don’t like milo.

Leave it in the store. It’s not a bargain.