Chips flew from a white oak limb as our son-in-law, Brian Ohlen, masterfully wielded a cordless chainsaw. He and our daughter, Nancy, were visiting from their Alaskan home.  Because Brian is a veteran chainsaw operator and former logger, we wanted his opinion on the EGO cordless chainsaw we recently acquired.

Brain Ohlen found the EGO Chain Saw to be efficient and lightweight.

The tree provided a great test. White oak is one of the best firewoods, but it’s a hard, tough wood that tests a saw. An extreme April windstorm snapped our tree off about twenty feet above the ground. Its massive top landed close to our barn. We were saddened to lose the magnificent oak that had spent a century converting Iowa’s sunlight into wood, but its death meant that we could, in turn, convert that solar energy into heat in our woodstove.

Brian kept running the saw as chips flew and piece after piece of firewood-sized wood dropped from thick limbs.  After the battery finally was depleted and we took a break while it recharged, Brain remarked, “This saw is amazing. It’s lightweight and quiet and it cuts swiftly.” He looked the saw over and added, “I was surprised at how long the battery lasted.”

Rich also is an accomplished chainsaw operator who logged for the US Forest Service one summer in Idaho. Like Brian, he is amazed at the efficiency and ease of use of the EGO saw.

Cordless, battery-operated carpentry tools emerged on the market a couple of decades ago and today are valued by craftsmen and women for their power, ease of use, and efficiency. More recently, battery fueled chainsaws entered the market. The key to their value is the ability of lithium-ion batteries to store an enormous amount of energy.

The EGO saw is highly user-friendly It eliminates the need for gasoline and runs without the smelly exhaust of a gas saw. It’s lightweight and runs much quieter than a gasoline counterpart. Like gas saws, it requires bar oil to lubricate the chain and occasional sharpening. Unlike most gas saws EGO has crafted the saw to be user-friendly.  For example, no tools are needed to open and close the sprocket housing or tighten the chain. This makes use a snap and saves time and the need to cart around a bar tool.

When I asked Brian’s opinion of the saw he responded, “This is an excellent saw for a homeowner who needs to cut dead branches and trim trees. It’s also a fast firewood cutter.” 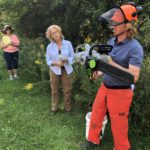 There is an important similarity shared by all chainsaws. They are powerful tools that must be used with respect and caution to prevent injury. When running any chainsaw wear eye, ear, and face protection, long pants, sturdy leather gloves and boots, and saw chaps. Saw chaps clip over pants and are designed to instantly stop a cutting chain that touches it. Chaps prevent serious injury to the thigh.

The EGO chainsaw is a dandy tool useful around the home. The battery that runs it also powers many other EGO tools, making a cordless tool system practical.