How Can You Keep Mice Out of Chicken Coops?*

There’s a Mouse in the House!

Sooner or later anyone who keeps a few chickens is likely to spot a mouse scurrying across the coop floor.  Most sightings are after dark when hens are snoozing on their roosts. That’s when nocturnal mice seek a chicken feed dinner.

Commercial chicken feed is nutritious to more than chickens. Small rodents also thrive on it.  They eat expensive feed and also foul it with their urine and droppings.  Mice should be eliminated from the coop.

Two general types of mice can be found in places where both people and chickens live. European house mice are common all over the world. They usually spend their entire lives in a home or chicken house and rarely venture outdoors. These tiny rodents are dark gray all over.  White-footed, or deer, mice are native rodents that commonly visit coops and the homes of the flock owner. They are easy to distinguish from house mice since, as their name implies, they have white feet and bellies.

While house mice live in a coop year round white-footed mice are more likely in cooler months. House mice usually eat food in place, while white footeds often carry seeds a distance and cache them in a hidden place to nibble on later. Find a pile of corn in an old boot or any other hidden place and the culprit is likely a white-footed mouse.

It’s not good to have either type of mouse mixing with chickens.  Although it’s probably not possible to totally eliminate them, several actions greatly reduce their abundance.

The best strategy for reducing mouse infestations in either a house or chicken coop is to keep them out.  Mice are tiny and athletic.  They can squeeze through small holes and cracks, the same openings that let cold drafts enter.   Keep both mice and cold air outside by filling in holes and cracks with caulking.  The best time to do this is in early fall before cold weather settles in.   Filling cracks also keeps box elder bugs, Asian beetles, and other insect pests outdoors.   Cracks can be anywhere but are especially likely around window and door frames and where wires and pipes enter a structure.

Mice enter a chicken coop to find shelter from bad weather, safety from predators, and dinner. They love eating grain and chicken mash or pellets.   Anything edible in the coop should be stored in metal containers with tight-fitting lids.  Mice easily chew through plastic ones so avoid them. Use metal trash cans instead.  Mice will help themselves to feed in a feeder, and most people leave feeders exposed at night.  Since chickens don’t eat during dark hours put feeders in a tightly lidded metal garbage can overnight. This will keep mice away from them. The feeders can simply be put back where the chickens can access them the following morning.

A neighborhood owl family can be a chicken’s best friend. Owls love dining on mice. Great horned, barred, and screech owls are relatively common in suburban areas and patrol nighttime neighborhoods seeking small mammals to catch and eat. Owls are active when chickens are securely sleeping in the coop. This reduces the odds that a hen will end up an owl meal.  According to Karla Bloem, Executive Director of the International Owl Center, owls can be a chicken keeper’s best friend.

Although it’s tempting to use poison to rid a home or chicken coop of mice  it should be avoided for these reasons:

Glue boards are pieces of cardboard or heavy paper covered with an extremely sticky substance. A mouse walking over a glue board will be held tightly. They can’t escape. While glue boards catch mice they also catch non-targeted animals. Any human who touches the sticky stuff will struggle to get free of it. Mice caught in glue boards usually starve to death or are found alive and struggling.  It’s cruel.

Mice are relatively easy to trap using any of the many devices on the market.  Most common are snap-type traps that have been effectively catching small rodents for over a century.  For people who prefer not to touch a dead mouse, newer type traps enclose the entire body.  Some traps are even electronic and electrocute the poor animal. There’s even a trap that will alert a cell phone when a mouse has been caught. 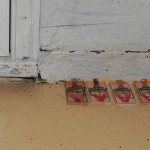 Place several traps side-by-side along a wall where you have seen evidence of mice.

Despite the fancy new type traps the old-fashioned kind, baited with peanut butter or soft cheese, is most common and least expensive. Traps should be set in places where chickens, pets, and children can’t access them. It’s best to set traps in the evening and either spring or retrieve them the next morning.  Following are tips for increasing trapping success:

Dispose of dead mice by flushing them down the toilet, putting them in the trash, burying them, or placing them in a woodsy or tall grassy area for scavengers to eat.  Chickens will eat mice, also.  Wash your hands well after touching the traps or mice.

Reducing mouse numbers in a coop is an important part of chicken husbandry.  It takes some effort but preventing an infestation and trapping any that lurk in the coop is important.

*Reprinted with permission from Hoover’s Hatchery.