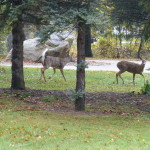 On Halloween day a buck was hot on the “tail” of this doe and yearling.

Drivers, be cautious! Across most of North America early November is the most likely time for a car to collide with a deer. Too often it happens even in suburban neighborhoods and a collision usually does extensive damage to a car, injures or kills the deer, and sometimes even people are killed or hurt.

At our home at Winding Pathways we watched a buck chase a doe on Halloween afternoon.   That’s slightly early, but during the next two weeks more cars will hit deer than in any other time period in the year.

In early November female deer come into estrus in northern states with peak activity a week or two later in the south. Big antlered bucks have the uncanny ability to stay out of sight most of the year, but in November they abandon caution and run through backyards and cross roads at any time of day or night. A doe in heat is usually followed closely by an eager buck.

When driving through deer territory always be careful, but in early November be especially cautious. Go easy on the gas pedal, keep your eyes open and if one deer crosses the road in front of you expect others to follow. Look in the direction the deer came from.  Others likely will be about to cross.

An interesting overview on deer rutting can be found at The Noble Foundation.