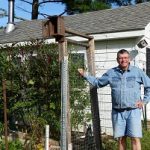 A variety of fencing keeps deer and rabbits out of the garden.

Like millions of American homeowners we at Winding Pathways have a love/hate relationship with deer. Few animals are as beautiful as a peaceful doe nursing her fawns or as majestic as a powerful buck sporting husky fall antlers. But a love of deer only goes so far. Anger mounts quickly when they devour flowers and vegetables, girdle valuable trees, or dart in front of the car on a dark night. Last year we planted a small river birch that was growing well until a buck utterly destroyed it while rubbing his antlers on it. Frustrating!

Until about 25 years ago deer mostly lived in large forests and rarely ventured into town or suburbia, but as their rural population grew they moved right into town. Most suburbs have plenty of wooded pockets where deer can hide and nutritious forage in parks, gardens, and yards. Today deer are amazingly abundant in suburbia, where they prance up and down streets and dine on valued vegetation.

Deer generally do two types of vegetation damage. One’s relatively easy to prevent, while the other is more challenging.

RUBS:   Antlers form during warm months as a blood rich skin, called velvet, nourishes fast growing bone like antlers that are mostly calcium. By September, antlers have reached full growth. Velvet dies and dries, and bucks remove it by rubbing antlers against small trees. They prefer saplings a few inches in diameter. Rubbing often girdles and kills the tree, and deer always seem to attack the most valuable tree in the yard. It’s infuriating and costly. Although velvet is mostly gone by early October deer continue to bang and rub their antlers against trees throughout the fall.

The Cure:   Fortunately there’s an easy way to prevent rubbing.

At Winding Pathways we use heavy wire in 2” X 4” mesh that we buy in 50 foot rolls. It’s relatively easy to cut an eight foot length of fencing using wire cutting pliers. Once we have the section cut we ring it around the tree and hold the ends closed with cable ties. Usually one metal fence post driven 18” into the ground will hold the wire in place.  Sometimes two posts placed on opposite sides of the tree are needed.  We attach the wire mesh to the post using big cable ties. The wire stays in place year round until the tree is at least 4 inches in diameter and no longer threatened by rubbing. 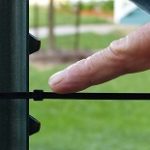 What You Need to Make a Wire Ring

Putting a ring of wire around valuable young trees is almost certain to protect them from rubbing and browsing. Just be sure to do it before damage starts. 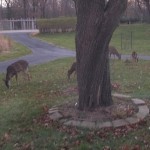 At Winding Pathways deer come into the yard. We protect young trees with fencing as seen in the back to the right.

LUNCH AND DINNER WITH BREAKFAST TOSSED IN:    Deer love eating many landscape and vegetable plants. Although they have preferences, the hungrier the deer, the more likely they are to even eat plants they generally dislike. Garden books often list species of plants that deer do and don’t like to eat but beware, like humans, individual deer have food preferences. Although most deer may not like a particular plant species, others may consider it a dining delight. Deer seem to have regional tastes, so the plants they don’t like in Connecticut may be gourmet fare in Alabama or Iowa. Unfortunately, many plants that deer relish are the same ones homeowners like to plant, so protecting them is vital to success.

Damage to trees by rubbing is seasonal and normally only happens in the fall. In contrast browsing damage happens all year with deer generally eating softer vegetation during warm months and twigs during winter.

The Cure:   Preventing deer from eating valued vegetation is difficult but here are some ways to either eliminate or stop it:

No doubt about it. A sturdy fence keeps deer away from plants and prevents damage. Fencing has downsides. It’s expensive, often unsightly, and it requires maintenance. A fence can ring an entire property or just an area that needs protection, such as around the vegetable garden. Generally there are two types of fence used to prevent browsing.

A good fence will prevent deer damage by keeping hungry animals away from desirable plants.    Repellents are less certain but can help reduce damage. Repellents are most helpful when temporary protection is needed or where fences won’t work and they are less expensive.  They have these disadvantages:

Our good friends Dave and Sue Kramer own Kramer’s Flower Farm and produce thousands of varied colored day lilies every year. Visit their farm in mid-summer and it is a sea of blooms. People love looking at colorful flowers but deer consider them lunch. Kramer’s farm is surrounded by woods, so they have to be vigilant in keeping deer way from their crop. Dave uses a home-made spray that keep deer at bay.

One gallon of water.

Add ingredients and shake well. Leave in the sun for a couple of days. Shake again and filter through an old nylon stocking to remove lumps or they will clog the sprayer. Put in a standard sprayer and spray plants.  Treatment needs to be repeated often and after every rain.

Deer don’t like the smell or taste of rotten eggs. Who would? Anyone who would rather not make their own egg based spray can buy commercial mixes. The one we use is called Deer Stopper and is made by the Messinas Company. The label says it’s made of putrescent whole egg solids, rosemary oil, mint oil and several inert ingredients.

After buying several inexpensive sprayers that clogged we bought a Stihl brand sprayer that works well and seems less likely to clog.

Whether using a home-made or commercial repellent remember it needs to be reapplied relatively often and always after a rain.

Each year we harvest a deer from our property. This doesn’t stop deer damage but does provide us with food, and if enough people each take a deer, their population density and, thus, damage will decline. So, if it’s legal in your area, consider converting a deer to food. Normally a state and sometimes a local permit is needed. Look for a future Winding Pathways blog on how to harvest and dress a deer.