Prepare for a Storm: Hurricane Season is Here – Blizzards Will Follow

Dealing with a two week power failure in relative comfort 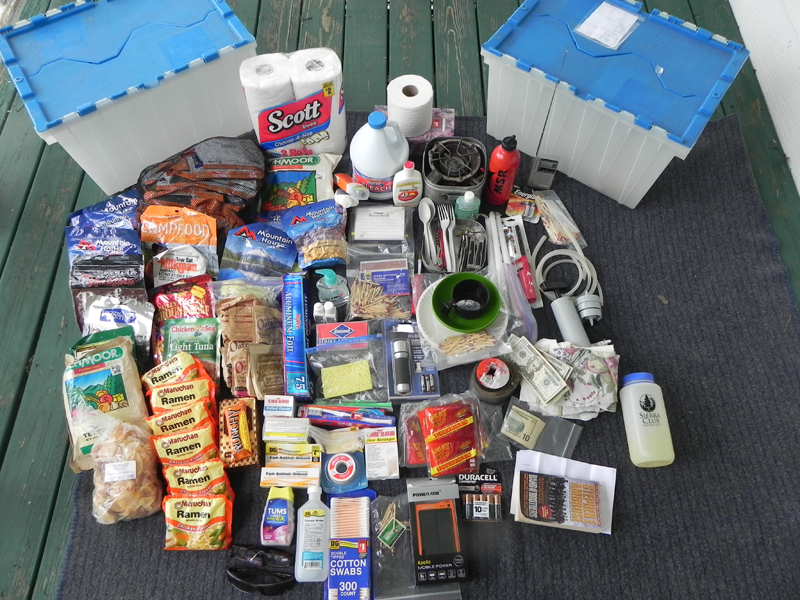 Each year natural disasters shut down gas, electric, and water services to millions of homes. More than ever, people’s lives are being disrupted by storms, earthquakes, and fires. But few are ready to weather a week or two without utilities.

A weird accident many years ago helped the Patterson family prepare for future outages. On a pleasant summer afternoon a worker’s cutting torch accidentally ignited a huge Styrofoam dome covering our town’s sewage treatment plant. Black toxic smoke welled up from raging flames and spread over the homes and businesses of thousands of people. Disaster sirens wailed as the police department ordered everyone to leave town quickly.

With smoke thickening around our home we tossed camping gear, food, and a jug of water in the trunk, put the kids in the back seat and headed for clean air. An hour later we pitched the tent in the yard of a friend who lived miles away. The next morning with the fire out, the air cleared and authorities let citizens come home.

Fortunately our disaster impacted a small area for a short time. It happened during warm weather and didn’t harm homes, roads, or utility infrastructure. That’s unusual. Increasingly common are monstrous winter and summer storms, wildfires, and even earthquakes that destroy buildings and knock out utilities for days or weeks.

While predicting where and when a disaster will strike is impossible, certainly millions of people will experience one in coming months and have their lives disrupted. Prudent people will have prepared for a disaster by assembling a kit of items that can be used in the home when utilities go down or quickly tossed in the car if evacuation is ordered.

Enduring a week or two without utilities isn’t fun, but having the basic items in permanent storage keeps life relatively comfortable. The Patterson family keeps enough of the following basics ready to ride out a two-week power disruption:

We store all items, except sleeping bags and a tent, in bins where they can be quickly reached.

LIVING SAFELY AND COMFORTABLY WHEN A DISASTER KNOCKS OUT UTILITIES

It seems to be happening more often. Wildfires, tornadoes, earthquakes, hurricanes, and human disasters create enormous damage over vast areas. These natural events knock out electric and gas service, close stores, and make travel difficult. Sometimes it takes weeks to restore utilities most of us take for granted.

The most likely disaster to strike an American family is an extended power outage caused by a storm. Could you ride out a winter week or two in comfort….without utilities?

Few are prepared to either quickly evacuate our homes or stay put while a blizzard rages outside or cope when electricity and gas don’t work. Creating a preparedness plan and assembling simple and inexpensive items make enduring a few powerless days or weeks safe and reasonably comfortable.

Winding Pathways LLC encourages every family to develop a disaster plan and assemble items useful in the event of an evacuation or long term utility outage.

A family preparedness plan can be as simple as a discussion clarifying what needs to be done and who is responsible for doing various actions in the event of an extended power outage, evacuation need, or some other emergency. Plan items should include having:

All family members should have a copy and one should be in the preparedness container.

Years ago our police department ordered residents to evacuate within one hour because toxic fumes were spreading into neighborhoods from an enormous fire. We had never considered an evacuation and hadn’t developed a plan or a kit of items to quickly grab and toss in the car. Fortunately, we had camping equipment, food, and other essential items scattered about the house and garage. With hurried scrambling we had them in the trunk and were on the road seeking cleaner air within a half hour.

After the air cleared and we returned, our family developed a disaster plan and gathered the items we wanted to take if we ever needed to evacuate again. Or simply use at home if a disaster knocks out utilities.

We store emergency items in three easily accessed places and can gather and load them in the car and be on the road in fifteen minutes.

We began by purchasing two large plastic storage bins to hold an array of small items. We stocked them with items we anticipated we’d need if our power went out for a week or two or we needed to evacuate. Many were simple “around the house” items like matches, candles, old silverware we weren’t routinely using. Other items such a tiny portable radio and solar cell phone charger we bought.

We began stocking the bins with obvious items we’d need. Dried foods, toiletries, and flashlights are logical. But some things are easy to overlook, so we occasionally add something new. Two examples, many people use credit cards for nearly all purchases. When the power goes off they don’t work. Cash does. So, we hid cash in small bills in our bins When Hurricane Sandy hit the East Coast in 2012 cell phone service remained working in many areas but homeowners had no way to recharge their phones. So, we added a solar powered phone charger to the bin.

It’s important to have two easy to overlook items safely stored for emergency use: Cash in small bills- Credit and debit cards don’t work when the power goes off- and a cell phone charger, such as a solar powered one.

Here’s what the Patterson’s have ready in case of a massive utility failure:

Items outside the bins but easy to grab:

Tents, sleeping bags, stoves, and other camping equipment are invaluable during disasters. Often they can be purchased at great markdown late in the summer after the normal camping season is over or found at garage sales.