How Squirrels Can Hang Upside Down! 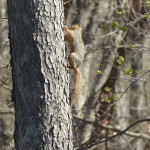 Squirrels “wrists” articulate so they can climb agiley up and down.

One is hanging by their rear toes to snatch seeds from a hanging feeder. How do they do it?

Raccoons and house cats can climb up trees fairly rapidly but descending back to earth is a problem. Both must creep down tail first. It’s awkward and slow.

Squirrels, in contrast, can go up and down head first quickly and gracefully thanks to a special adaptation. Their ankles, or wrists, articulate. The squirrel may be heading down the trunk but its feet and claws point upward, enabling a good grip on the bark and a speedy dexterous descent.

Squirrels are outstanding tree climbers but once in a while they slip and fall. Twice at Winding Pathways we’ve seen squirrels fall from the top of big oaks. As they fall the hapless animals flattened themselves out and hit the ground like a swimmers belly flop. In both cases the animals shook themselves, looked around and scampered off unhurt. Imagine what would happen to a human falling 50 feet!

Next time you spot a squirrel hanging from a feeder or scampering down a tree examine its feet through binoculars. You may see upward facing feed on a downward facing animal. You Tube has some great close ups of squirrels paws and wrists.  Enjoy the show!

We are lucky to have four species of oak trees on our property. Huge white oaks hug the north end with a few red oaks scattered between them. Two medium sized black oaks live close to the house and a young bur oak is just beginning to cast shade south of the house.

Millions of other homeowners are also fortunate to have oaks shading their property. They are one of the most widespread trees, and are beautiful, sturdy, valued by wildlife and long lived. A white oak could shade the ground and feed squirrels for up to 400 years. Some species, like red oaks, grow relatively quickly and tolerate moderate shade while most other oaks, like our bur, need full sun and grow slowly.

About 600 oak species are found naturally across the northern hemisphere. Approximately 90 species live in the United States. China boasts around 100 species, and Mexico is probably the world leader in oak diversity with at least 160 species. They have been widely planted in temperate regions including many places where they don’t occur naturally.

Oaks are members of the beech family with the genus name Quercus. It’s rather easy to distinguish an oak tree, but determining just what oak species a tree belongs to can be tricky. Many oaks hybridize with similar oak species and a tree may have characteristics of each parent. Sometimes the shape of an oak leaf near the top of a tree may be shaped differently from a counterpart lower down.

Non-showy oaks flower in mid spring about the time leaves appear. Male blooms are slim, drooping and green or tan in color. Each female flower is a solitary spike. People allergic to the wind borne pollen generally suffer in the spring.

Throughout history oak wood has been readily used by people. Even wine corks are made from the bark of Portuguese oaks. Oak was widely used in the construction of sailing ships. It’s said that the oak sides of the USS Constitution were so tough that British cannonballs bounced back. That’s where the nickname Old Ironsides came from! Oak is the traditional wood for liquor aging barrels but today it is most commonly used for hardwood flooring and furniture. Few woods produce more fireplace heat than oak.

Squirrels are just one of the wildlife species that love acorns. Among the host of other wild animals that relish acorns are deer, bears, woodchucks, wild turkeys and blue jays. However, oak leaves or acorns can be toxic to cows that eat too many. Tannin is the bitter element in oaks and acorns and long ago humans learned how to remove it to create delicious food. Each fall we look forward to harvesting acorns. Few foods are as delicious as maple syrup on warm acorn muffins.

Subscribe to Winding Pathways to learn how to process acorns into food.

One of the most fascinating tree books ever written was published back in 1948. It is a two volume set by David Culross Perry. One volume covers trees of eastern North America while its counterpart describes western species. If you spot it for sale at a garage or used book sale snap it up.

Websites, apps and books abound that help identify and learn about trees. Our favorite websites are from the National Arbor Day Foundation at and the US Forest Service. Our favorite tree identification book is the Sibley Guide to Trees. 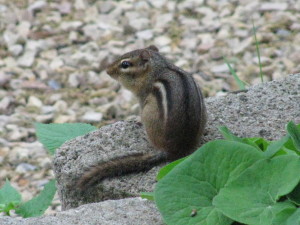