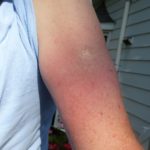 Even before Lyme disease created a serious tick-borne health hazard no one wanted ticks crawling on them. We sure don’t want them at Winding Pathways and because our yard has tall grass, shrubs, and a woodland we have tick habitat. 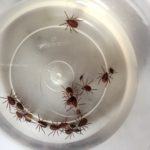 A few years ago, Rich contracted Lyme Disease caused when a tick injected bacterium into him. Thanks to a wise physician and effective antibiotics he was cured, but it’s possible to get Lyme Disease again and again. We’re more cautious about avoiding ticks now.

Ticks of many species live throughout most of the United States. They’re common in brushy, grassy, and woodsy habitat but they also love living in yards. It’s possible for a tick to enjoy a human meal even if that person never leaves a mowed yard.

Although naturalized yards are sometimes good tick habitat they also attract tick predators that love to snack on the tiny invertebrates. Many small birds, including warblers, wrens, and brown creepers among them quickly convert any tick they find into lunch. 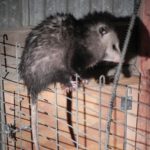 A newly understood tick-lover is the common opossum. Many people consider this ancient marsupial a homely animal and would prefer to not have one in their yard, but they might want to rethink this. According to the Carey Institute, opossums are tick vacuum cleaners. As they walk through a yard ticks hitch a ride, thinking they will be able to burrow into the animal’s skin and feast on warm blood. The tick doesn’t realize that possums groom their fur often and comb out ticks. These are readily eaten by the always hungry mammal. Having an opossum in the neighborhood can reduce tick numbers.

Small predators, like the fox, are also valuable in tick reduction. According to a study by Dr. Hofmeester,  Foxes and coyotes eat mice that ticks feed on. Ticks need three meals before they can reproduce, so more foxes and coyotes can reduce the mouse population and thus, the tick population by “…breaking the cycle of infection.”

Tick numbers are also associated with climate change and abundance of food.  Dr. William H. Schlesinger in an April 2018 issue of Citizen Scientist wrote about the work of Rick Ostfeld with the Carey Institute. The occurrence of ticks one year relates to mice numbers the year before, which relates to food abundance in previous years. The chain of life!  And, according to Ostfeld, white-tailed deer are less implicated, unlike initial beliefs, and turkeys also appear to help reduce tick numbers. That is great news for us at Winding Pathway because the wild turkeys pretty much take over our yard at times! 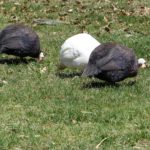 A domestic bird that loves ticks is Guineas. They are tick lovers.   They are African natives that have been domesticated.  Elise Gallet de St Aurin, of Cheshire Moon Farms, told us the guineas that roam her farm near Atkins, Iowa, keep it clear of ticks. These attractive but loud animals roam widely, roost in trees, and eat all sorts of invertebrates, including ticks.

It’s impossible to buy or confine an opossum. But, guinea chicks can be ordered from Hoover’s Hatchery. Some people also enjoy eating guineas.

A simple way to reduce odds that a tick will hitchhike on a person is to use repellents and chemicals that kill them. Any insect repellent containing DEET will repel ticks.   Spray it heavily on the legs and arms and on clothing, especially pant legs, shoes, and socks. DEET doesn’t persist long and disappears after clothes are washed so it needs to be reapplied often. 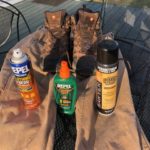 A more permanent solution is to use a spray containing permethrin. This chemical actually kills the ticks. It lasts a long time, even through several wash cycles. It should not be applied to the skin. We spray it on our pants, socks, and shoes. One set of Permethrin-sprayed-pants remains hung in our cabin – not in the house – to put on when we are venturing in likely tick habitat. 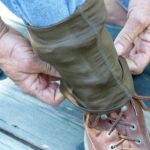 Protect yourself with gaiters

Ticks usually access a person from down near the ground. They’re most likely to cling to pant legs or socks and then walk uphill on the skin. Tucking pants into socks makes life harder for these pesky animals, and we take it one step further. We bought a pair of tick gaiters from Forestry Suppliers, Inc. They cost about $11 and fit over shoes and pant legs, forming a tight seal.

Doing a “tick check” is important. After being outside take a hot sudsy shower and check the body over for ticks. Fortunately, they usually wander around on the skin for several hours before burrowing in. A tick that has not penetrated the skin won’t spread disease and often is simply washed down the drain.  Launder the clothes right away.

Ticks deserve respect. They can spread serious disease and they lurk where people often go. Don’t let a fear of ticks keep you inside. Go outside and play but take precautions to reduce the chances of catching a tick-borne illness.