Turkeys: Gift To the World 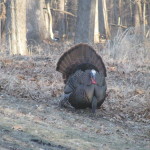 As we enjoy Thanksgiving dinner we pay homage to the great gift the Americas gave the world.

Beef, pork, lamb, and chicken all come from animals with Old World origins. Shortly after Europeans discovered North and South America, Australia, New Zealand, and other new worlds they introduced these familiar and useful farm animals. Before Columbus made landfall, Native Americans knew nothing about these exotic animals. But, they knew turkeys.

Of all common meat animals eaten today only turkeys came from the New World.  Before Columbus, wild turkeys abounded across much of North America. Their domestic cousins were tended by some tribes. Treated with great care, the domesticated turkeys were an important source of clothing, tools and food. Among some uses of the tribes of the Four Corners of the United States, turkeys provided feathers for coats, eggs for eating and reproduction, and bones for tools. Evidence exists that the Native Americans cross bred for certain valued characteristics. Europeans quickly developed a taste for turkey and brought them eastward across the Atlantic where they became a common European food.

Our Thanksgiving dinner consists of turkey, potatoes, and winter squash, all Native American foods. Sometimes we add acorn muffins and capstone the meal with a long time family recipe for pumpkin pie, made from a plant that also originated here.