Only a few years ago few people had heard of lithium. Now almost everyone relies on this odd metal in their phone, laptop, and tools. It’s a world-changing element.

Metal?????  Lithium is a truly odd metal.  Iron, lead, and other common metals are heavy. Not lithium. It’s near the upper left corner of the periodic chart near hydrogen, the lightest element. Lithium is light, volatile, and scarce. Argentina and Chile, Australia, and China form the “lithium triangle” and hold the world’s greatest reserves. Smaller amounts are mined in the United States and other countries.

Lithium can jump. At least lithium-ion batteries can make a car jump. We experienced it when we drove a Chevy Bolt from Cedar Rapids to Dubuque. It’s an amazing car powered by energy stored in a lithium-ion battery, rather than gas. While driving on four-lane US 151 we stepped on the “gas” pedal and the Bolt jumped forward, swooping us around a sluggish car.

Lithium can also calm people down. For years it’s been an ingredient in drugs used to treat depression and bipolar disorder. The metal that makes a car jump can calm a person.

It’s also added to grease to make it even slicker.

Lithium-ion batteries store plenty of energy, recharge quickly, and are making a huge change in American life. It started in 1991 when Sony used the first lithium-ion battery in camcorders. Since then, phones, tools, electronics, and even cars and trucks are powered by energy stored in these batteries.

We went “lithium-ion” a while back when we purchased Milwaukee Tool brand circular saws and drills. We were needlessly worried they wouldn’t be powerful and would run out of charge quickly. They were false fears. We love our battery tools and now have Milwaukee inflators, (i.e., to pump up tires), fans, and a pole saw. We also have EGO brand battery power lawn mowers, a trimmer, and a snowblower. They’re easy to use, quiet, and powerful. We love our battery-powered tools and can see a battery-energized car in our future. 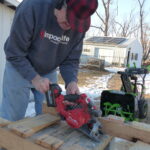 The battery gives a powerful charge. 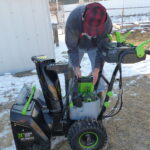 Batteries for the EGO snow blower are easy to charge. 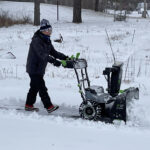 The EGO snow blower chews through heavy and light snow.

There are environmental and health benefits when using battery, or cordless, tools.   They are quiet and don’t emit fumes. No need to pull a starter rope on the mower or blower anymore. Just flip a switch and vrrrooom! they go.  Recharging batteries costs less than buying a comparable energy equivalent of gas, and there’s no flammable gas to lug home and store. It’s all good. There are downsides to lithium mining but the environmental positives outweigh them. Mining can be done responsibly.

Lithium-ion batteries are expensive but last a long time if given good care. Gerry Barnaby of EGO gave us these tips for battery care:

We’ll continue to invest in our battery-energized tools that are so easy to use.