Both Marion and Rich at Winding Pathways are regular blood donors. Rich will reach a milestone in early April. He’ll give his 100th unit of blood to Impact Life in Cedar Rapids.  Marion’s not far behind.

Giving blood is easy, costs nothing, and is a way we can help other people. Here are some interesting blood donation facts: 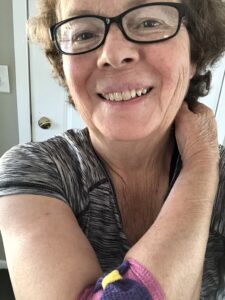 Giving blood is easy. And, Marion gets a cool blood band decoration!

We hope we’ll never need blood but if we do we’ll quietly thank the unknown donor.   Both Marion and Rich at Winding Pathways encourage everyone to become blood donors.