Bears sightings are in the west are common and increasing across the northeast. Mountain lion sightings and encounters are well documented in Los Angeles, CA.
A guest blog by Susan Fehsinger, New Hampshire
“I’ve spent most of my life in southern New Hampshire. Growing up, we never heard of bears being anywhere near our area, but their population has been growing rapidly. Now, we hear of them regularly. Our first live rural sighting was about 15 years ago. Since then, we either have seen them or evidence of them at least once a year.
“We live in the country on 16 acres and the nearest house is about 300 feet away across the road. There is plenty of bear habitat and they are becoming very common. Last year I was taking a walk along a class 6 road (a road that is not maintained any longer but is often used) when a black bear strolled up from the river and across the road about 30 yards ahead. I froze. S/he turned and looked at me for a long 10 or 15 seconds before continuing into the woods. Did I have my phone? Yes. Did I think to snap a photo? Nope.
“One morning this spring about 6:45, when the sky was fully light, I began to hear noises and thought our cat was running around upstairs. After a while, though, I looked out the window which opens onto our screen porch. Two bears were tearing into the stone retaining wall at its foundation. They were pulling out the seeds that the chipmunks had stored there. Both were fully grown and one of them was the largest I have ever seen in this area. The strangest part of this experience was that they didn’t spook at all. I called my husband and we both stood at the glass door taking pictures and talking.
“The population of our small town is growing, yet we are seeing more wildlife that used to be rare. I saw my first bobcat a year or so ago, also. It’s great to know that wildlife is doing well and large predators are around. We humans just need to be aware of potential danger — for us in case of a confrontation, and for them, if our behavior causes them to habituate to people. Fish and Game does not want to have to kill an animal that’s only crime is looking for food that we provide them.
“Beginning in early spring we are told to bring in bird feeders (and in my case stop using the screen porch as an extra refrigerator!) It’s definitely good advice because bears are excellent at finding any and all available food. Usually, the ones we see in early spring are females with cubs, and they can be very dangerous if a human  gets between “mom” and her little ones. The fact that “my” bears were digging into a stonewall to get at seeds stored by chipmunks underlies how good they are at their job — feeding themselves and their cubs. We can learn to outsmart them, but they’ve been perfecting their food-finding skills for a long time and their senses are much better than ours. We have to become aware and vigilant so we can enjoy the fact that they’re here among us — just not too close.”
Check out these links below about bears, habitat and behaviors. Many of these sites refer to “wild” places like parks and the North Woods. And, remember that the advice on respecting bears, keeping your distance, and storing food all to avoid bear encounters is similar and are great tips for suburban and urban dwellers.
Geoscience News and Information
Wildlife Research Institute, Ely, MN
University Press of Kansas
Earth Island Journal
Alaska Dispatch News
Sleeping Bear Dunes National Park
You Tube Video – Bears in Backyard Pool 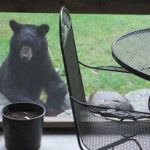 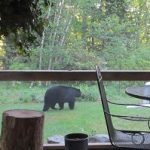 Bear moving off to the bird feeder.