Poison ivy is a universally disliked and feared plant. It seems to grow everywhere.  Encounter it and risk an itchy rash…..or worse. Some people are so sensitive to the oil on the leaf’s surface that they end up hospitalized.

Despite the discomfort it causes, poison ivy is an amazing native plant. It’s tough and thrives in any soil type, in drought or deluges. It loves living in the woods, at the edge of lawns and ballfields, and even in city vacant lots. It grows along ocean beaches and up mountains.

Scratching people may disagree, but there are two things to love about poison ivy. Both happen in the fall. 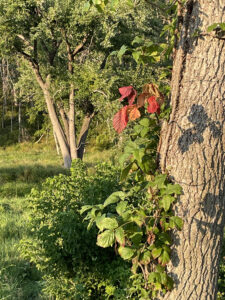 Keep your distance from this beguiling, colorful plant.

As days become cooler and daylight shortens poison ivy is one of the first plants to turn color. A month before sugar maples color up poison ivy leaves turn a glorious deep red.  By late fall birds enjoy eating plentiful poison ivy berries. Apparently, they don’t get the itch and happily spread the common plant’s seeds when they poop them out.

There is one certain way to prevent a poison ivy itch. Enjoy it from a distance. Only contact with the plant’s oil can cause a rash.  This can happen by touching the plant leaves or vines, patting an animal that has run through a poison ivy patch, accidentally touching clothes that have rubbed by poison ivy, or by breathing smoke with the oils in it when an area is being burned has poison ivy in it.