Do You Know a 99-Year-Old Teacher?

Henry is still a teacher. 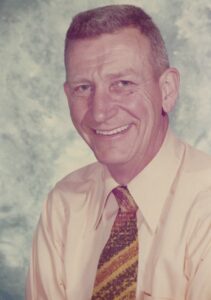 Our feature today is different. It’s about an amazing teacher. Winding Pathways blogs are normally about yards, backyard chickens, labyrinths, and occasional touches of home care and energy efficiency.   It’s about a 99-year-old who retired from his formal education career in 1996. Yet he continues to be a teacher for the fortunate people he encounters.

Henry Patterson, Rich’s father, was a teacher in the Florham Park, NJ, public schools for many years before retiring to his home in nearby Denville to spend senior years with his wife, Claire. Age caught up with them and they moved to a senior community, The Oaks of Denville, in 2018. Claire died the following year. Despite the grief, Henry has nurtured his sunny disposition as he has approached being a centurion.

“Look On the Sunny Side of Life”

He’s adored by the staff and residents at The Oaks as well as his family and friends in Denville. Everyone’s happy to see him, chat for a while, and enjoy his smile. Many help with daily functions that increasingly challenge a man who has lost most of his vision and some mobility. Regularly, former “shop” students dropped by the house and still visit at The Oaks.

As many people age, they become bitter, frustrated, and angry.  Think mosquito repellent. We put it on to keep the pesky bugs at bay. It works but isn’t confined to chemicals in a jar.  Abrasive behavior repels people trying to render kindness and assistance. 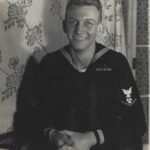 Based on his scouting experience, Henry taught other sailors knots. 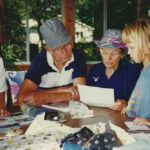 Henry’s father was a railroad engineer…

Claire and Henry lived on the Lake. 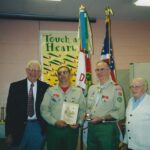 Henry has been a scout most of his life.

Henry has refined the opposite model.  He’s appreciative, thankful, understanding, kind, and always pleasant to everyone at The Oaks. From the high school students who work in food service to medical professionals who help him, and fellow residents Henry has a smile and a joke. His sense of humor shines so warmly that it takes him a while to walk down the corridor. This is not because 99 years of age slows his pace but because everyone he encounters he pauses for a kind word and usually caps the brief visit with a joke.

Henry taught thousands of middle school students how to craft amazing creations in his school industrial arts shop, but education didn’t stop on retirement day. He continues to teach everyone in his orbit that a warm personality and expressions of thanks and appreciation are rewarding and life-enhancing. 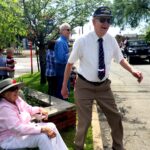 Henry attends and walks or rides in every Memorial Day parade that he can. 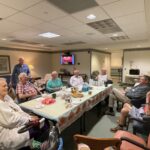 Residents gather for meals and conversation. 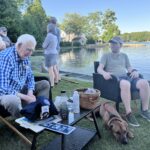 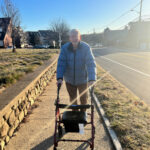