How Can Parents Influence Your Childhood Passions?

An old photo or letter can bring back memories. That happened to Rich recently and helped him recognize both good parenting and a lifelong passion.

Rich was sorting through a stack of family documents when he discovered a paper his mother wrote in his “baby” book.  Written in 1959, when Rich was nine, it stated that he wanted to be a chicken farmer!  Of all things for a kid growing up in suburban New Jersey to say.

Rich became fascinated with chickens while only four or five years old. By the time his mother wrote in the book he had learned many chicken breeds. Another letter, dated May 5, 1959, was written as an exercise in his elementary school. The teacher was teaching students letter writing.  Rich’s note to his mother said:

Thank you for taking me to the chicken farm. Now I know what a black hen looks like. I now know why one costs more than a Leghorn. I’m going to cook breakfast for you.  Happy Mother’s Day. Love, Rich

A third document is an account of how many eggs his hens laid each day and a bill presented to a customer. 65 cents for a dozen in 1960. Adjusted for inflation that dozen would cost $6.50 today. 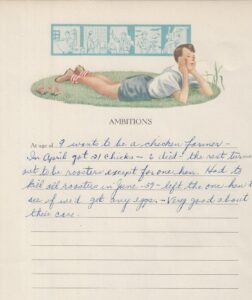 Dreaming of the future 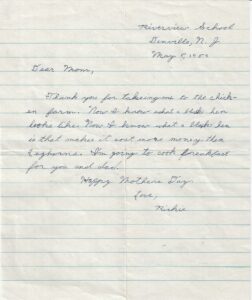 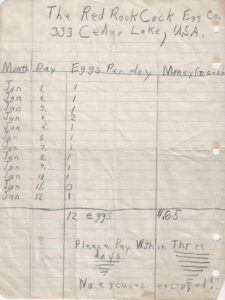 A pair of photos show 13-year-old Rich at his junior high school science fairs. One science project was titled, The Effect of Vitamin E on the Hatchability of Chicken Eggs, and the other demonstrated an incubator. 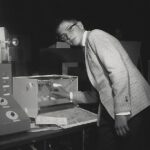 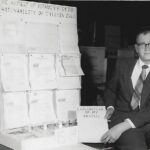 What Do These Documents Signify?

Rich encourages parents to encourage their children’s passions. They might lead to lifelong hobbies and, perhaps, even a career.

Rich never became a chicken farmer, per se, but he is co-owner of Winding Pathways where we encourage people to be creative in how they interact with nature and to consider backyard chicken raising. He developed another passion, fish, and earned a degree in fishery biology, and served as a biologist in Alaska.