How Do You Track Animals in Winter?

When the next soft snow falls, go tracking outside!  A mid-December 2019 skiff of snow delighted us. There was not enough of the white stuff to shovel but the thin white blanket that covered our yard revealed who visited the night before.

The dimples of deer tracks were clearly visible as we went out to get the newspaper, but one set of tracks was unusual and especially interesting. Four footprints, in a rough line, kept repeating with about three feet of untrod snow between them. Just what animal created them? 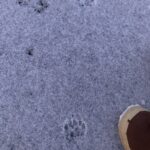 A skiff of snow is best for tracking. 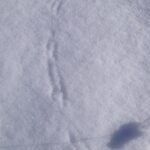 A small bird left tracks in the snow. 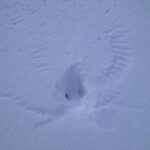 After a bit of sleuthing, we decided it was a coyote out seeking a mouse or rabbit dinner.  Coyotes aren’t rare around our home but they aren’t in the yard often. We wish we could have watched it lope across the yard.

A skiff of snow makes for a delightful walk in the woods, grasslands, or wetlands.   Often animals are easy to spot as their dark coats contrast with the white snow and tracking is superb. It’s usually not hard to figure out what animal made the tracks, and following them gives some idea of what the animal was doing and where it was going.

Many Websites and books help with track identification but we like www.naturetracking.com because it shows tracks of animals most likely to be in a backyard. 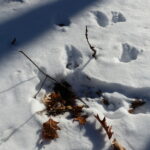 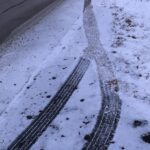 Even humans leave tracks all over. 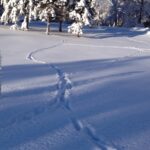 Deer paths are most obvious in deeper snow.