How to Rescue Chicks in the Cold!

We had agreed to brood 75 rooster chicks for the Rodale Institute. In past years we have brooded a dozen to 25 chicks for our own flock. That was easy.   We could brood them in a big cardboard box, and if it was cold we situated the brooder in the basement where the temperature was already warm.  A heat lamp easily boosted it to the nearly 100 degrees hatchlings need.

We’d ordered Rodale’s chicks and 15 pullets for us from Hoover’s Hatchery to arrive on April 7. That’s usually an ideal time, as spring’s temperatures rapidly rise. So, by May, chicks can go out into the non-heated coop with only a heat lamp to take the chill off on cool nights. 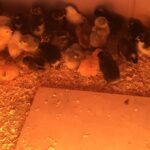 When temperatures too cool, chicks huddle to stay warm. 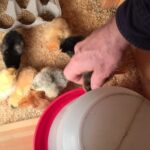 Dip the chick’s beak in water so it knows where to drink. 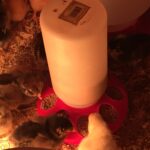 This year a cold front brought snow and wind the day before Kelsey Spotts was to deliver the chicks from Hoover’s Hatchery. Because we were brooding 90 chicks, we made a big brooder in the unheated barn. The weather was so cold that even with three heat lamps it was just too cold in the big brooder. With just a day before the babies were to arrive, we had a crisis. 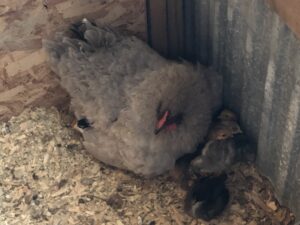 Mama hens are the natural way to brood and raise chicks.

For thousands of years, broody hens patiently sat for 21 days on fertile eggs. Then, on that magical day when they hatched, mamas hover over them to keep them toasty warm from their body heat. Even if a cold snap arrived hens keep their babies warm. Today, most chicks lack a mother.  A brooder keeps them warm but ……. ours was too cold.

We scrambled.  Fortunately, we had scrounged crates from a wood scrap pile outside a business that welcomes people to take and recycle their discarded wood.  We used the wood to craft a temporary brooder in our wood stove heated cabin and installed two heat lamps. Presto, the temperature hovered just at the 100 degrees the chicks need.

The next day Kelsey delivered all 90 chicks. They moved right in and immediately started eating, drinking, peeping, and pooping. Now, a week later, the weather hasn’t warmed much, and the chicks remain in the temporary brooder in the cabin. They’re growing and feathers are forming.

The forecast next week promises a warming trend. So, as soon as the barn brooder comes up to about 90 degrees the chicks move there. Why 90 instead of 100? When chicks hatch, they need the full warmth but as they age their temperature needs drops by about five degrees a week. So, by the time they are six weeks old, they will be comfortable at a balmy 70 degrees, and that’s a common May temperature. No more need for artificial heat or a brooder. 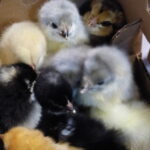 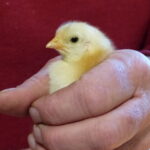 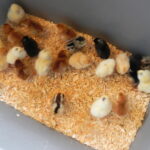 Rodale will use their chicks for a research project at Etzel’s Sugar Grove Farm. Researchers will learn if chickens foraging in corn can eat enough insect pests to eliminate the need for pesticides, and their poop will fertilize the crop.

Watch for future blogs about the chicken in corn project.