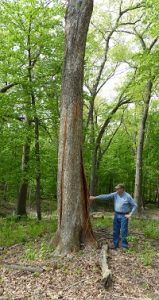 This stately Oak took a full bodies hit that vaporized the sap and blew off the bark in four places.

An enormous explosion brought us bolt upright in bed. 10:44 p.m. just after we’d fallen asleep on April 27th. . The blast was so powerful it knocked pictures off the wall shattering the frames and glass. A quick check revealed no other home damage and a few low rumbles assured us that the noise had been thunder created by a very close lighting strike and not a bomb.

A few days later we discovered a massive white oak about 300 feet from our home with its bark blown off in four different places and loose in others. The lightning’s heat and force vaporized the tree’s sap and enormous pressure blew the bark off. It’s hard to imagine that so much damage could happen in a two tenths of a second-long lightning bolt.   The thing is, the tree top is lower than our home! Why did lightning strike there and not the house?

A lightning strike isn’t always a tree’s kiss of death. If only a narrow swath of bark is blown off it may recover. But we fear our magnificent oak was so damaged that its days are numbered.

The tree’s imminent death is good news for small songbirds, especially brown creepers that seek shelter between loose bark and a tree’s trunk. As the oak gradually deteriorates it will provide food and shelter for a host of insects and the woodpeckers that love dining on them. We anticipate a day when our pileated, red headed, red bellied, hairy and downy woodpeckers nest in the old oak snag.  Eventually it will topple over and over time return nutrients from rotting wood to the soil. 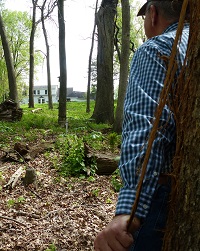 The distance from the lightning strike to the house is about a football field.

Lighting can be both lethal and sneaky. Every year it strikes about 25 million times in the United States and kills an average of 49 people.  Many more humans are hit but survive, often with lingering physical problems. Ligntning is nothing to fool around with. As we learned on April 27th sometimes lightning strikes well before the main storm arrives and after it leaves. The safest place to be is inside a building away from windows, pipes, water, wires and landline telephones.

To stay safe, follow the 30-30 rule of thumb.  When you first see lightning, begin to count “One Mississippi, two Mississippi….” until you hear thunder.  If you hear thunder before you reach the number 30, lightning from the storm is in striking distance. Go inside!  And, after the last rumble of thunder wait 30 minutes before venturing outside again.

An outstanding source of information, including many safety tips, is on the US Government’s website.