Losing Oreo: the Death of a Pet Leaves Sadness

We’re not normally pet people. Never had a dog or cat. When our children were growing up, we had bunnies. After they grew up and left home years ago, we cared for the bunnies left over from their youth and adopted a couple from Kirkwood Community College in the early 2010s. When the last bunny died in 2015, we were petless and had no intention of adopting an animal.

Oreo Comes to Our House

Then, a call came just as the pandemic gained strength in early 2020. A family was moving out of state and couldn’t bring Oreo, their pet rabbit, along. Would we take her in?  It looked like we’d be confined to home to stay disease safe, so we said, “Yes”.

Oreo was an indoor bunny and came complete with the hutch, food, and supplies. Soon she settled into her comfortable hutch in our den near where Marion does office work. She did more. We quickly learned she’s smart, funny, clean, inquisitive, and a good friend.

We tried to encourage her to chew on wood in the hutch (not furniture and doors!) by rubbing yogurt treats on the wood. Well, she learned to lick off the flavor instead of chewing the wood we gave her.

We often sat on the back deck in mild weather and even on nice winter days.  To keep bugs out we hung a temporary screen at the back door that closed with magnets.  Oreo quickly learned to nose under the screening to go in or out at will when we sat outside.

She’d roar out of her hutch in the morning and park by the computer grooming herself. She spent much of the day resting on the floor by the desk when Marion typed, and we soon called her our able office assistant. Every so often she’d stretch and want attention. She’d nudge Marion’s pant leg with her nose for a scratch behind the ears and rub under the chin. If that didn’t work, she’d scratch the pant leg.  If THAT didn’t work, she’d thump. That usually got the attention she wanted.

She’d romp around the deck while we were reading the morning paper and gleefully dig in a sandbox that we created for her.  Rich would dangle his arm low and she’d come over for a rub.  He’d switch hands to the other side of the chair and Oreo was right there for continued love. Each evening was “treat” time. A Russell’s Rabbit orange or green “cookie.” Rich broke it into pieces and Oreo would grab a piece and hope two feet away and nibble on it, then return for more pieces. We learned, don’t even think about patting her while she was eating!

Did You Know Rabbits Vocalize?

She vocalized with a growl if annoyed and when nervous or upset she squeaked.

This past year, when we left for a few days and neighbors watched her they reported that she stood up on her hind legs, looked around, and seemed to wonder, “Where are they?” Because she could see us go up and down the stairs evenings and mornings from her hutch, she learned we disappeared up there. So when we were gone, she even went to the foot of the stairs and looked up wondering, “Are they there?”

During the pandemic, she gave us laughs and companionship. She was a fun companion. So, fun that perhaps we didn’t recognize how much a part of our lives she’d become.

Although only about five years old, one morning we found much blood in her hutch that came from urine and, perhaps, her intestines. Concerned, we took her to Bright Eyes and Busy Tails in Iowa City.

Their staff were kind and knowledgeable and confirmed that the blood was caused by an unknown internal problem. They could do tests and maybe take action. Surgery perhaps.  “What did we want to do?” they asked.   We talked it over and rejected intensive testing and possible resulting, expensive, and uncomfortable techniques. Actions that would ultimately result in the same ending. Sadly, we requested euthanasia for our friendly Oreo. It was done peacefully and painlessly while we held her and sang her special “Oreo Song” that Marion sang to her several times a day while scratching behind her ears and rubbing under her chin.

Part of the Prairie

That afternoon we buried Oreo beneath the wildflowers of our prairie, along with the other bunnies. But, sadness lingers. We miss her. We talk with her in the spot where her hutch once was.  We visit her grave.

We know the sadness will fade over time and we’ll glance at her photos occasionally.  Mostly we feel gratitude for the time she shared her life with us. And all the bunnies our family has had as friends. We posted a Salute to Bunnies on YouTube.

“Oreo the bunny, you’re so funny. Oreo the bunny 1, 2, 3.
Oreo the bunny, the black and white bunny, You came to live with Rich and me.
You have two black ears and two black eyes and black spots down your back.
You have a black and white nose and four white paws that go clickity clack
On the deck or on the dining room floor when you go to explore.
Oftener than not, you stretch right out by the threshold door.
You’re a good little friend. You came to our house. You came to live with us.
You run around. You “binky”. Sometimes you thump. Then, you’re quiet as a mouse.”

Be well, Spirit of Oreo, and all loved pets everywhere. 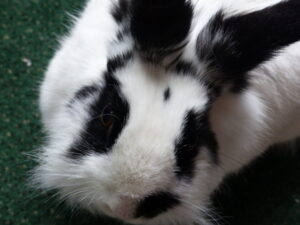 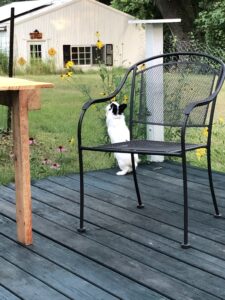 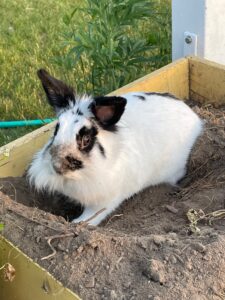 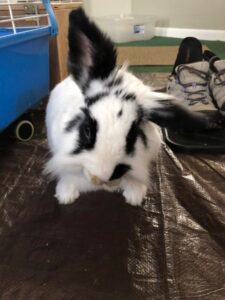 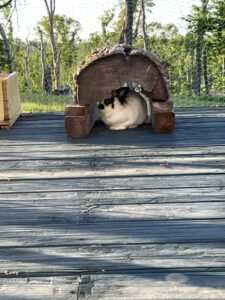 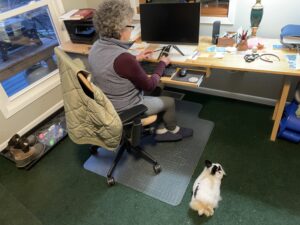 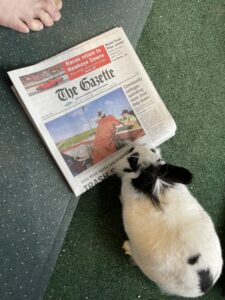 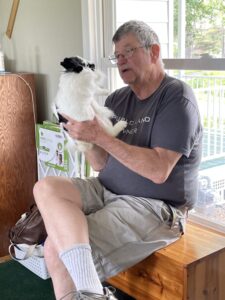 Oreo tolerated being picked up… 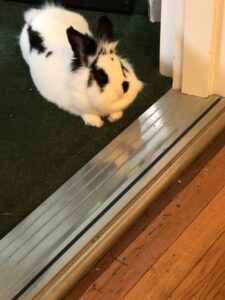 Waiting by the threshold door. 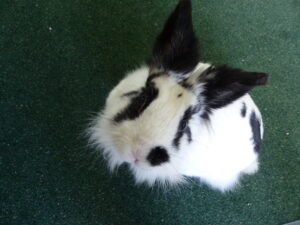