Saturday, May 9th was our big day. We planted our newest prairie and we’ll tell you how after we explain the ground preparation we did before a single seed was dropped to the ground.

We’ve established several prairies with no ground preparation by simply broadcasting seed on an existing lawn and waiting……a long time. For the first two years, there was little evidence of prairie, but we let the lawn grass grow tall and burned it each fall. By the third year, prairie plants started to appear. We continued annual burns and by the fourth and fifth year, it had more prairie than lawn plants, and every year it got better.

For our new prairie, we wanted to shortcut the process and get it established much faster. We knew that involved spraying the lawn with herbicide to kill the grass plants and weeds. Following spraying we’d till the area, smooth it out, and broadcast our prairie seeds. We had a problem. We lacked sprayers and machines, so months ago we hired Sustainable Landscape Solutions to spray and till.

On a Monday in late April, they arrived and sprayed the area we had marked off. It’s about 3000 square feet. The old turf began showing stress in a few days, but the sprayers had missed a few spots. They returned a week later and sprayed it again. On Friday, May 8 they arrived with a mini skid loader and rotadairon attachment. This amazing machine tilled up the now dead grass and left the area with a mild textured pattern that looked perfect for seeding. 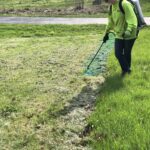 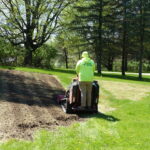 The rotadairon machine quickly turns over the dirt.

We had bought a Leopold 2 seed mix from Pheasants Forever weeks ago and had it in storage. It contained a blend of at least 70 native wildflowers and some short profile grasses. We didn’t want tall big bluestem, switchgrass, or Indian Grass and asked that they be excluded from the mix. Allendan Seed Company removed the tall-growing seeds and added in some Little Bluestem, Sideoats Grama, and Prairie Dropseed. Our prairie will be mostly flowers with some grasses that don’t get tall. Prairie restorationists and botanists often call wildflowers forbs. It’s a useful word to know.

We had a problem. We’d bought enough seeds to cover a half-acre, but we were seeding only 3000 square feet, so we had about seven times too many seeds. Still, they only weighed 3.36 pounds and were all in a rather small bag. We decided to plant heavily and put them all on the new prairie.

Many prairie plant seeds are so tiny they’re hard to see. Some are fluffy and blow in the breeze. A technique helped us get an even planting. We dumped two gallons of fine sand into our wheelbarrow and poured in just enough water to make it damp…….not wet. Then while one of us mixed the sand with a shovel the other dribbled the prairie seeds on the sand and soon we had a sand/seed mix. We mixed about half the seeds, or three pounds, into about 30 pounds of sand.

The sand does at least three important things. First, it adds bulk to the seeding mix, making broadcasting easier. Second, tiny seeds cling to the moistened sand grains weighing them down. That way the sand and clinging seeds don’t blow in the wind and descend to the ground where we want them. Third, the sand we used was blond and it contrasted with the black dirt in the planting area. It helped us spot areas we had planted and get uniform coverage.

We put the sand and seed mix in small buckets and walked side by side gently broadcasting seed as we walked along. We paced ourselves so we covered the entire area about when half the seed/sand mix was exhausted. Then we mixed the rest of the seed with damp sand. We filled our buckets and walked across the area at right angles to our first seeding, broadcasting seed as we walked along. Soon the entire area was seeded as evenly as we could possibly do it.

After a short coffee break, we took leaf rakes and very lightly raked the area, pulling a thin layer of dirt over the seeds and ensuring good seed/soil contact. We were done. 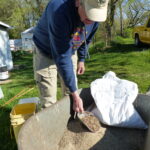 Rich mixes the seeds and sand with water. 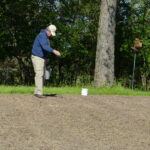 Rich broadcasts the sand-seed mixture on the newly tilled ground. 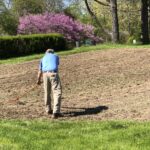 Gently rake the seeds in.

Again, there are many ways to seed a prairie. Several commercially made seed drills work great and are most appropriate for big areas. And, many people have created small prairies by avoiding seeding completely and buying plugs of prairie plants from nurseries. Two good sources are Prairie Moon Nursery (www.prairiemoon.com) and Ion Exchange (www.ionxchange.com). Using plugs is expensive but works well for tiny prairies or when introducing new plants into an established prairie. Skipping the herbicide and tilling also works but takes several more years to establish the planting and some prairie plants may not be able to compete with existing lawn grass.

Now, all we had to do was wait for gentle rain and warm weather to kindle germination.

Our next installment of blogs on our prairie restoration project will be about tools we use and the management of the newly seeded area. Tune in soon.