Mice got into the hybrid system of my Prius and destroyed it. They also got into our greenhouse and ate some important seeds my husband  Bob was growing. These critters are a common problem, but we have always used live traps; after all, they were here first and are just doing what they need to do to survive. That is until they crossed the line and, reluctantly, we declared war and the snap traps and peanut butter came out.

Once a nature lover, always a nature lover, though, and hoping that some good can result, Bob puts the dead mice out in places where they will be found by “someone” looking for an easy meal.

Yesterday he had an amazing experience. He had caught a couple of mice and put them out but yesterday afternoon no one had taken them, so he moved them to a more open place. As he was crouching down, he felt something soft. An owl swooped down and took the mouse while Bob still had the tail in his hand. The owl remained still in a nearby tree, for the rest of the afternoon while the second mouse stayed on the ground and we waited to see what would happen next, but nothing happened before dark. This morning both are gone.

We have hosted at least one pair of Barred Owls for many years. We rarely see them, so yesterday was a real treat, but we regularly hear them (“Who cooks for you?”) Since mice are the secondary host for deer ticks (those are the ticks that carry Lyme disease) these owls and the yearly expanding family of hawks which also lives here are very welcome.

Be sure to take in the International Owl Center in Houston, MN, this winter. Their Owl Festival is scheduled for March 1-3, 2019. Whooo’s up for it?

Mice! Keeping them Out of the House

After a balmy fall, the television weather report promised near record cold and snow in three or four days. Mice don’t have televisions but somehow, they knew this because several of the tiny mammals successfully entered our house just before cold arrived. One scurried across the floor as we were reading the morning newspaper.

We agree and have developed a strategy to keep them out – at least most of them.

One tactic we do not do is poison. Karla Bloem of the International Owl Center in Houston, MN, reminds us that poison spreads.  When a predator eats a poisoned mouse, it absorbs the poison.  Over time, the poison builds up and kills the predator. People end up with more mice that can cause problems.

Here’s what we do at Winding Pathways:

Old fashioned mouse traps still catch mice efficiently, but a few tricks make success more likely. (With the exception of the poison information in this website, we have found this information to be appropriate.)

Bait. Probably the best bait is peanut butter. It just takes a tiny dab on the trigger to work.

Placement. Where you set traps is important. Mice naturally run along walls and dart under counters if they can. Traps set in the middle of a room are less likely to catch mice than those set along a wall with the trigger on the wall side. 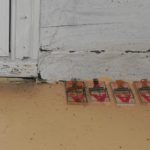 Double up. It’s usually most effective to set several traps in the same spot. So, set two or three touching each other. The first trap or two might not catch the mouse.  Usually one will

Keep setting the traps until you catch no more mice. Often people assume they have one mouse, but likely, there are more.  Keep trapping until they’re all gone. We dispose of dead mice by simply tossing them outside for our local opossum to eat. They can be flushed down the toilet.  Always be sure to wash your hands after handling mice or traps.

A Mouse in the House

A long-ago children’s story began something like this, “There is a mouse in my house.  It is a very nice mouse. It has a long, long tail and shiny eyes.  It pops out of its hole and runs. My mother likes the mouse, but she says, ‘A mouse does not belong in a house.’”

Well, guess what, a sure sign that fall is approaching is “a mouse in the house.” These tiny mammals realize that shorter days and cooler temperatures beckon winter. Finding a safe warm place to live with an abundance of food helps them survive the tough season.

At Winding Pathways we expect mice to appear with the first cool weather in late August or September. Once in a while we have seen one scurrying across the floor, but more often we have found their tiny black droppings on counters. Sometimes we have heard them scurrying about an upstairs closet.

Two types of mice inhabit houses. Both gobble birdseed and will eat nearly anything people do. They capable of doing damage and possibly spreading disease.

The common house mouse is a gray mammal native to the Old World that is now found everywhere people live. They like houses, barns, garages, and sheds but are rarely found far from buildings and live indoors all year round.

Several species of native mice live outdoors most of the year but move inside each fall. These are normally called deer or field mice and are beautiful tiny mammals with shiny eyes and white feet.

They store food, while house mice don’t. Find a pile of sunflower seeds in a shoe and the culprit is a native mouse.

We love wildlife but don’t tolerate mice in the house. So, each fall we plan an eviction campaign.

Here’s how we reduce mouse problems at Winding Pathways:

Mice are fascinating animals that play an important role in nature, but they belong outside.  It’s probably not possible to entirely eliminate them from a house but simple techniques will encourage them to stay outdoors.

You have to give mice credit. They’re survivors. As days shorten the tiny mammals seem to know that spending the winter in a warm home with bountiful food left out beats eking out a grim existence in the cold and snow.

Each fall mice move into houses to enjoy free meals and warmth. Human residents often aren’t aware that they’re sharing their home with these tiny residents until droppings appear on the kitchen counter.

There are two general types of mice that enjoy indoor winter life.

The common house mouse is a gray animal native to the Old World. It was brought to North America soon after European settlers arrived centuries ago. Now found all over the world, this mouse almost always lives near people and is rare out in the woods. It often spends its entire life in a home, dining on easily accessible food, and even having babies – lots of babies – inside. Catching sight of a mouse scurrying across the floor is rare, but the shy animals leave their calling cards as droppings that look a little like grains of pepper.

Several species of native mice, often called white footed or deer mice, also enjoy wintering indoors. These beautiful native rodents usually spend the warm months outside, have their babies there, then enter a home in the fall. As the name implies, the animal’s feet and belly are white.

White footed mice cache food. Find a pile of sunflower seeds in an old shoe, and you’ve found evidence of this animal. House mice don’t cache food but eat it where it’s discovered.

Hardly anyone wants to share their home with mice of any species. Here are tips for keeping mice outdoors where they belong:

• Fill exterior cracks and holes with caulking and weather-stripping to make entry challenging. Tightening up the house reduces the unwelcome entry of both tiny rodents and cold air.
• Eliminate food sources inside the house. Never leave pet food in open dishes overnight. Clean up spilled human food, even tiny crumbs. Store sunflower seed and pet food in metal containers with tight lids. Keep all human food inaccessible.
• Encourage and appreciate mouse predators. If owls wake you in the middle of the night with their raucous calls, just thank them. They are the midnight patrol eagerly converting mice to dinner. Many hawk species work the day shift seeking rodents. Snakes are also effective mouse predators but are only active during warm moths. Some cats catch and dine on mice but a pampered declawed tabby isn’t going to dent their numbers.

Despite the best efforts to discourage mice, some are bound to get into the house. Here are tips for getting rid of them:

The old fashioned mouse trap can be amazingly effective in catching and immediately killing mice. Buy a bunch of traps. We have about a dozen at Winding Pathways. Bait each with a dab of peanut butter or margarine, making sure that the bait gets pushed into the tiny circular piece of metal attached to the trigger. Mice almost always run along a wall or partition. Set traps against the wall with the trigger side nearest the wall. Set a bank of three or four traps side-by-side and against each other, all with triggers facing the wall.

We set the most traps close to where we see mice or their droppings, but also set some in rooms where we haven’t seen mice. Sometimes we catch them there. Even after we’ve caught a few mice we keep traps set until none have been caught for a couple of weeks.

Some traps claim to either catch mice alive or in a way that a human doesn’t have to touch the dead animal. We shun both. Supposedly the live traps are humane, but what do you do with that scrappy animal? Let it go outside? If so it may beat you back into the house, freeze to death, or be quickly caught by a predator. We consider a quick death by conventional mouse trap more humane.

Poisons and glue traps work but we also avoid them. Poison seems cruel and often a mouse dies a slow death behind the refrigerator or hidden in a wall. Soon the stench wafts through the house. Glue boards are pieces of cardboard or paper coated with amazingly sticky stuff. Any mouse that steps on it sticks. Trouble is glue boards don’t instantly kill the animal. Often in its effort to free itself the unfortunate animal gets completely stuck and a human needs to decide how to humanely dispose of a living but very stuck mouse. If you don’t want to live with mice as house guests, traps are better.