For many years Rich wrote a nature column for the Cedar Rapids GAZETTE about little known aspects of natural history common in suburbia. He was amazed when more people responded to a column on toads than anything else he had written. People like toads. Some readers called him to talk about “their” toad that lives in the garden or a damp corner in the garage. They wondered what treats they could give “their” toad.

Toads herald spring’s arrival with lusty evening trilling, usually in May. Common and intriguing, they enjoy living in suburban yards as well as woodlands and wetlands.

Many toad species inhabit the world but the Eastern Toad is most common in the United States. It ranges from about Nebraska east to the Atlantic and from southern states north to nearly Hudson’s Bay in Canada.

Where do Toads Live?

Both toads and frogs are amphibians. (The bloopers at the end of this video are fun to watch! Shows what it takes to put together even one short educational video!)

Toads, however, spend much of their lives away from water. A damp shady place to live and plenty of insects and other invertebrates to eat suits their needs. Toads often spend the day hiding in damp garages, under rotting logs, and in secluded garden spots. Come evening they hop around seeking tasty bug meals.

As amphibians toads need standing water to reproduce. Each spring toads hop to ponds, wet road ditches, and big puddles to serenade the night with their loud trilling. Females lay two strings of eggs in the water that hatch into tadpoles within two weeks. The warmer the weather the faster the eggs hatch. Toad tadpoles are easy to recognize. They are tiny, black, and have bodies much larger than their thin tail. Often hundreds swarm in a small pool. In less than two months they change into mini toads that hop far and wide seeking a place to live. They’ll eventually grow to about three inches long. 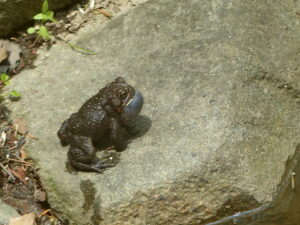 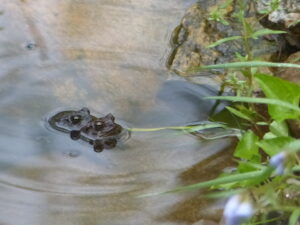 Although many animals enjoy a frog meal, few eat toads. When bothered toads often emit a foul-tasting liquid that makes a hungry dog or raccoon immediately drop the animal unhurt. Probably their main predator is the hognose snake, which relishes a toad meal.

Caring for “Your” Toad

Most people like toads and many gardeners create damp quiet places in their gardens for them to take shelter during the day and forage for pesky insects come nightfall. As for a toad treat, well, they really don’t need one but they might like to snack on a few mealworms or earthworms.