What is a Nor-easter?

Dover, NH, 4:00 a.m. Temperature 5 degrees. The wind chill is probably close to -10 degrees. Wind gusts 40-45 mph throughout the day. What is a blizzard?  Wind gusts more than 35 mph. Snow blowing and drifting. Visibility less than 1/4 mile.  All more than three hours. We grew up with blizzards, know them well, and call them Nor’easters.

The description above is what I saw outside my living room window all day on January 29, 2022, in excess of eight hours. There is a large green space next to my apartment building with a stand of pine trees at the far end, where there is no snow. An area just outside my apartment going out about 20-30 feet where the wind blew the snow off all day long made it look like we had only a dusting of snow.  Beyond that, snow accumulated up to 1″-2″ per hour for several hours.  Most of the day, I could not see the trees which are less than a 1/4 mile away. 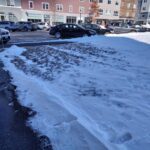 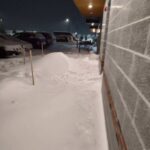 The building blocked the wind.

Following the Progress of the Storm

The well-predicted storm made its way up the coast from South Carolina, past Washington, DC, Philadelphia, and New York to New England. Snowfall reported in Bridgewater, MA, totaled 32″!  Out at Wellfleet on the south side of Cape Cod, wind gusts reached 82 mph. Fortunately, in Dover, NH, we weren’t hit with as much snow and wind gusts were in the 40 mph range. Most of the day and into the evening I watched snow blowing horizontally past the windows. Whiteout! An all-day blizzard. 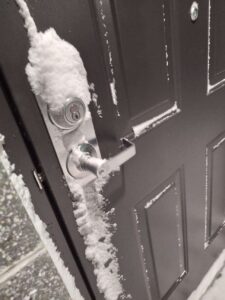 Opening the door was difficult

7:30 p.m. I decided to get my mail if there was any. True to the USPO motto, through rain, wind, snow, and dark of night the Post Office did deliver the mail! Getting out my door was difficult as the snow had accumulated to about three feet. So, it was hard to open the door.  Along the sidewall of the building I trudged. Not as much snow there.  But, once I reached the lobby door, I had to get to the security post to swipe my key fob to open that door. Snow spilled into my boots and I had to shove the door open about a foot to squeeze through. After picking up my mail, I made my way back to my apartment.

The snowfall seemed to be easing up but it was hard to tell as the wind still picked up and carried snow horizontally past my window. Remembering that some Eastern big cities had had fires in apartments recently, I was concerned with conditions by the exit doors. So, I called the answering service of the apartment complex. Shortly our maintenance supervisor returned my call.  I explained the situation and my concern that in case of an emergency requiring evacuation of the building the other residents might not be able to get safely out. He replied that the snow removal team would return the next morning. After some discussion, with the supervisor being unrelenting with his statement that the team would be back in the morning, I simply asked who would be liable if an evacuation were needed and people could not safely get out. Then, I hung up.

Soon after the property manager called, respected the fact that I was observing the conditions and he wasn’t.  He called the supervisor of the snow removal team.  Within the hour they arrived!  I was relieved!

Sunday, January 30, 2022. The day dawned bright and beautiful! What a change from not being able to see because of the blizzard!  People were out with their pets and children enjoying the light, fluffy snow. The snow removal team cleared the overflow lots and residents moved their cars so the parking log could be properly cleared.  Gigantic piles of snow were all over the place and sidewalks, doorways, and cars cleared of the eight inches of reported snow.  One town, right on the ocean about 12 miles away, got the state’s grand total of 13.5″. The wind, she kept on blowing and the temperatures were bitterly, brutally cold. 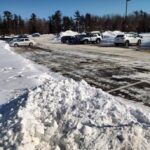 People moved their cars to help with snow removal. 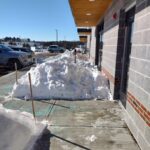 The doorways are cleared of snow. 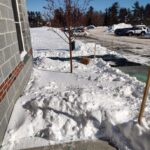 The next day, in appreciation, I called the supervisor to thank the crews for coming out in the storm and making sure residents were safe.

Prior to the storm, everyone had been told to stay off the roads, which they did.  All-day Saturday, I had watched a storm tracker show from a Boston station. Indeed except for plows and utility crews restoring power, the roadways were clear of vehicles.

I LOVE SNOW and this was quite an event!