How Do You Prepare for a Derecho?

Well, you don’t. These powerful storms develop quickly from what seems like a “normal” thunderstorm. Even the weather service can be caught off guard as happened Monday, August 10, 2020, as a series of storms developed over Nebraska and swept East rapidly.

Gustavus Hinrichs, a Danish immigrant, and professor at the University of Iowa, recognized these storms differ from hurricanes because the winds move quickly in a straight line.  Hence, derecho.

This link has satellite imagery of the formation of the derecho with Eastern Iowa being the epicenter.  Over 20 counties have qualified for disaster aid.

Winding Pathways sustained damage especially the trees. And, we are working each day in the community to help recover. In the future, create.

For now, we invite readers to support local organizations in communities damaged by natural forces like fires, storms, and droughts. 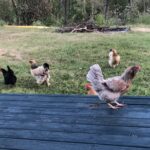 We are OK. The chickens were truly “free-ranging” for ten days before we got temporary fencing back up.  They keep eating our food scraps, foraging for insects, and laying eggs so all is well.
And, we will update as we can. 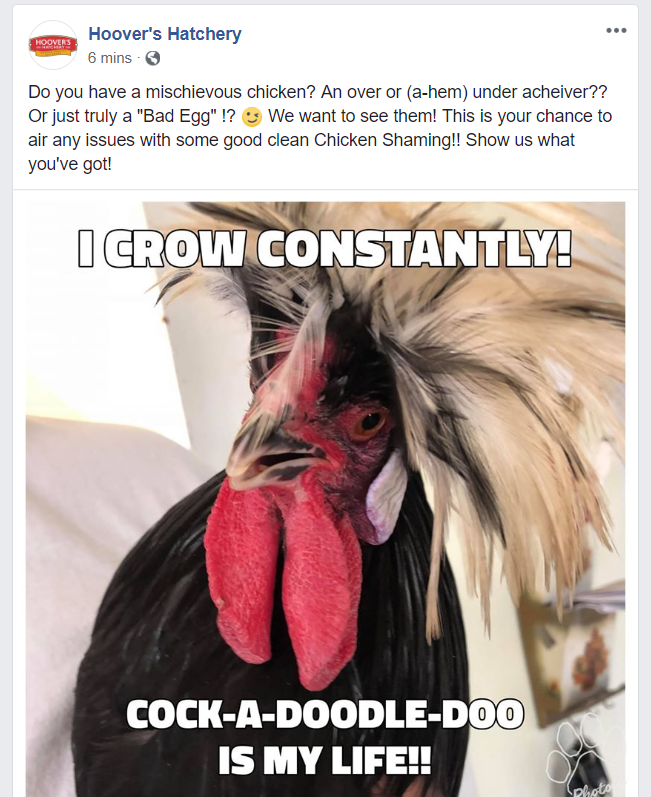 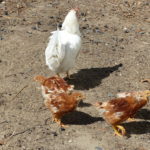 Now a couple of months old, the quartet of chicks is exploring farther afield. After the cold and snowy introduction to the outside world in late March, they readily follow Mama Hen outside.

Mama protects them inside from the other hens by cornering the chicks and standing literally in front of them, screening them from the others who get too close. Outside, Mama clucks and calls the chicks over for food and again, warns off the adults with a serious sounding tone and lunge toward one that may get too close to the chicks or be aggressive toward them. 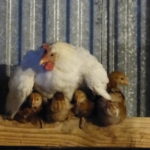 The chicks learned how to fly up onto the roost with Mama and she mightily shelters them at night. We were worried the first few nights in April when temperatures fell to 11 degrees.  But, they did OK.

Getting back down off the high perch is a challenge. A hilarious video shows three on the ground foraging and one walking back and forth screwing up courage for the long “flight” down.

Enjoy our blogs, pix and videos of the chicks growing up.

You know Steve Brown is from Texas right away. Vernon, Texas, to be exact. Home of the Red River Valley Museum, that features native sons trombonist and singer, Jack Teagarden and singer-songwriter, Roy Orbison.  Brown’s drawl and easy manner draw you in. But, there is something else in his voice – maybe a hint of an Eastern clip? Perhaps a touch of wry Midwestern humor?  And, what about the creative way he describes raises chickens in the north?

All of these are part of Dr. Stephen Brown who has lived, studied and worked in Upstate New York, Kansas, and now Alaska.  “I grew up raising chickens since age eight,” he stated. “I love the soap opera of the coop,” he added. An engineer and self-professed “tinkerer” Brown is smart, innovative and ambitious. Above all, he is good with people. Pretty important qualities since he is District Agriculture and Natural Resources Cooperative Extension Service Agent for the Mat-Su/Copper River District of Alaska. He integrates his specialties of Global Positioning System (GPS) and Geographic Information Systems (GIS) with agriculture and the environment.

He applies his advanced degrees in Environmental Sciences from the University of Texas at San Antonio and the State University of New York, and his numerous publications and presentations practically for those living in the far north.

As Alaskans learn to raise poultry, till the soil, and ward off predators Brown is right with them. “I get to remote homesteads by boat, airplane and snow machine,” he said.  “I may be the only extension agent in the country with reimbursement mileage for a snow machine,” he quipped.

“Chickens can adapt to the cold when they have a safe coop,” explained Brown. After arriving in Alaska about a dozen years ago, he experienced some of the challenges of “high latitude farming.” He researched and presented keynote talks across the US and Canada. Then, he adapted methods that fit with homesteader lifestyles and pocketbooks. “You have to be practical because of the costs,” he explained. For example, temperature extremes make watering farm animals a problem.  Since you don’t want to haul fresh water out every day and everything in Alaska is expensive, Brown adapted dog water bowls to stay heated in the winter for the low cost of about 15 bucks.

Brown also addressed other barriers to raising poultry in the far north. “Frostbite and ammonia build up are the two largest killers up here,” he explained. To prevent frostbite on chickens’ toes, Brown simply installed flat perches instead of round ones, so the chickens’ feathers covered their toes when they roost. Frostbite solved.

Animals also need to be safe from predators – bears and mosquitoes. So, the coop must be sturdy, have mosquito netting inside heavily wired windows, and have good ventilation. He converted an old horse stall to a secure, ventilated and warm chicken coop. He affirmed that chickens can handle the cold and only adds a heat lamp when temperatures really drop into the double-digit minus degrees.

The deep litter method works well to keep the coop fresh and prevent ammonia build up. Spread a thin layer of fresh litter about once a week and toss in some treats for the chickens to scratch and keep the litter turned over. A couple of times a year he uses the “Tom Sawyer” method of cleaning up the coop. “I invite local gardeners to come over to my place twice a year and clean out the deep litter. I show them how to use it in their gardens to improve their soil for better crops,” he explained. Win-win.

Some poultry techniques he teaches in “Chicken U” classes which fill up. These include such basics as how to safely catch, hold, and butcher a chicken. Classes are booming and so is poultry husbandry. According to Brown, in the past eight years, chicken orders have skyrocketed from single thousands to well over 120,000.  He gets to experience the great results of good husbandry and farming in part because he is president of the Alaska State Fair board of directors. The State Fair runs late August.

In his position, Brown is passionate about more than chickens. He has been on the cutting edge of promoting Rhodiola rosea as an important cash crop for Alaskans.

And, he is not all work and no play.  His recreational pursuits run deeply, too – literally. He’s a marathoner and mountaineer. Since 1979 Brown has summited numerous peaks and seeks to summit on all continents.  He even mused about taking a chicken to the top of Denali. “Even though I am no a spring chicken myself, I think it’d be kinda fun,” he said.

Call him up some time to chat chickens and crops.  You’ll know him at the Alaska State Fair by his drawl and friendly manner that draws you in.

It may seem odd for a bird that evolved in tropical Southeast Asia to thrive up in the frigid north but increasing numbers of people are enjoying the benefits of backyard chickens in Canada, Maine, Michigan’s Upper Peninsula, in Northern Minnesota, and even Alaska.

Although, chickens are hardy and adaptable, raising them way up north requires special management. Among the challenges both chickens and their owners face is frigid temperatures, vastly different day lengths between winter and summer, and the sometimes difficulty of buying feed and supplies in areas far from where chicken culture is common.

Steve Brown, extension agent for the University of Alaska Fairbanks Cooperative Extension office, Palmer, AK, has been advocating chicken husbandry in Alaska for many years. He has a flock and regularly helps others acquire and manage birds. It’s challenging but the rewards are many. 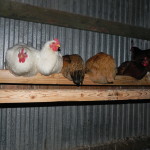 Chickens sheltered from the cold.

Everyone knows Alaska is a cold place, so during the long winter hens need a coop that protects them from the wind and predators and moderates the temperature some. Moisture causes chicken manure in litter to quickly generate ammonia so keeping the coop dry is important. Brown uses the deep litter method to keep the coop floor dry and only occasionally warms his coop when temperatures drop really low.

Chickens are daytime creatures and in southern Alaska there’s upwards of 17 hours of darkness in the winter. “LED bulbs solve the lighting problem and keep expenses down. Electricity is expensive here, and LED bulbs provide great light while consuming little energy, keeping my costs down,” said Brown. During warm seasons he lets his chickens forage in the yard and also uses a chicken tractor.

Nearly all food is shipped to the state, so finding fresh eggs is challenging, but Steve and many others enjoy eggs that come directly from the coop. Fresh eggs sell for $8 a dozen! 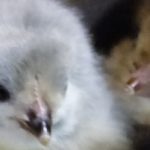 Chicks can successfully be shipped to the cold north.

But, where do the chicks come from? “I buy chicks from a company in Texas. They airmail them to me and they arrive in good shape. Usually I buy about 100 chicks, raise them for several weeks and sell most of them to other families who want chickens using Alaskas List, like Craig’s List. I keep a small flock at my home,” he said.

Feed and supplies are hard to come by in Alaska and expensive. “I don’t buy grit but collect sand and small pebbles from a nearby river bank, and I feed my chickens a lot of kitchen scraps, dog food, and fish scraps. Sometimes fishy taste gets into the eggs,” he said. 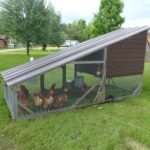 Another family that raises far north chickens is Paul and Karen Colson. They probably raise the most northern flock in the contiguous United States. They live in Minnesota’s Northwest Angle. The Angle is a relatively small area bounded by the Lake of the Woods and Manitoba. To reach it, a driver must enter Canada, drive NE about 40 miles, and then reenter this remote part of the United States. Like Alaska, nearly all supplies must be hauled in a long distance.

The Colsons raise broilers and keep a small flock of laying hens. Although not as far north as Alaska they face the same challenges of cold, day length, access to supplies, and predators as Brown does and manage their chickens in a similar way.

No place is really too far north to keep chickens. It takes more time and work to keep hens healthy in a harsh climate but the fresh eggs and meat they provide make it worthwhile.