One of our 14 chickens is a true American Ninja Chicken. Most of us know the TV program American Ninja Warriors where athletes navigate extreme obstacles to beat the buzzer. Well, this gal, a California White, is right up there with the most athletic of them all. 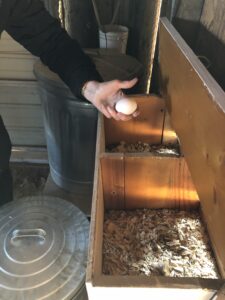 Our American Ninja Warrior Chicken begin to lay eggs at about 20 weeks.

Like most hens, when she reached about 20 weeks old, she laid her first egg in our coop. Then another a couple of days later. Then, none. And, none the next day. That’s unusual. When a hen starts laying, she’ll usually continue.

One evening, Rich counted the hens. There were 13. Hmmmm.  Where’s the 14th?   Had she met her fate?  After recounting three times, checking the run, and scratching his head over this mystery, came a cluck from the attic of the barn. Could she have made the tortuous way up through the rafters into the barn’s attic?  Naw. No chicken could do that. Then we remembered that another California White hen had laid eggs in the barn attic.  So, Rich got the stepladder and checked anyway.

There she was up in the barn attic above the coop our second American Ninja Chicken proudly looking at her freshly laid egg.

A chicken myth is that they are dumb. Everyone “knows” that. Nope. Not true. To get into the attic our hen had to be both smart and athletic. Brains figured out a pathway through rafters, plywood, spools of wire, and stored items. Athleticism got her there.  She negotiated an obstacle course like what we watch on TV’s American Ninja Warrior.

Once she reached the barn attic, she found the darkness and privacy hens appreciate when nesting. Unlike human ninjas, 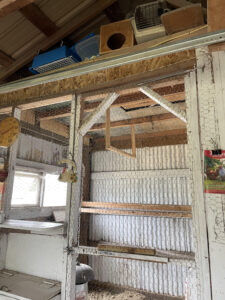 The American Ninja Warrior Chicken wormed her way to the barn attic.

there wasn’t a buzzer to ring when she got up there, but her clucks gave away her presence.

We admire her athleticism and smarts, but laying eggs up there won’t work. We need to easily collect them. So, we spent a morning plugging up any possible route to the attic.

We may have succeeded. Today’s egg was in the coop, but we’re certain she’s trying to figure out how to again reach the attic.  She might outwit us.

When do Chickens Start Laying Eggs?

Female baby chicks usually start laying when they are 16 to 24 weeks old. Of the many breeds of chickens those that lay white eggs are relatively small, agile, and intelligent.  They can worm their way into inaccessible places and fly like a pheasant.  In contrast, most brown egg layers are heavy and cumbersome, and struggle just trying to get airborne.

Our American Ninja hen is a California White, a Leghorn hybrid.  She’s small, fast, agile, and determined and lays white eggs – in the attic of the barn.