“Go Outside and Play!” 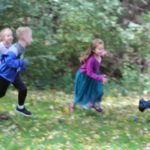 Kids get creative outside

“Let’s play outside!”  For baby boomers, that was something we said and did every day.  Driving slowly through neighborhoods was a must in those days because the yards and streets were literally full of kids.  We played outside after school and on weekends, 365 days a year.  Every day was a “play date.”  No need for mom or dad to arrange one.

In today’s world, you can drive for miles through town and not see a single child.  What changed? Three main factors are frequently cited as the reasons for this retreat from outdoors to indoors:

In the 80s and 90s, there was a handful of child abductions that became a part of the 24-hour news cycles, such as the Jacob Wetterling case.  They gave parents the impression that these abductions were becoming more frequent, even epidemic So parents became reluctant to let their kids play outside.  We now know, however, that for decades the number of stranger abductions of children has remained unchanged, according to readily available statistics, such as those from the Office of Juvenile Justice and Delinquency Prevention.

Video gaming and screen time are obvious to us all.  When we do see kids in public, their noses are glued to their phones.

Organized sports and activities are great for keeping kids busy and healthy, and, at least for a short time, away from their phones.  But there is a negative side.  Kids and parents are overscheduled, driving from school to sports/lessons to fast food to more sports/lessons.  Stress and burn out are among the many negative results.

So, what can be gained by having kids go outside and play? 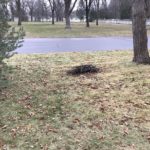 Solving the problem of squirrels raiding the feeder. 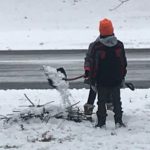 Henry adds to his squirrel-proof wall.

How can we get our kids to play outside?  We can’t just open the door and tell them to go outside and play.  In two minutes, they’ll be coming back in saying they’re bored and want to do their screens and games.

So, here’s how to start: 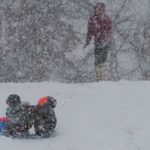 Go outside and play with the kids for a while. 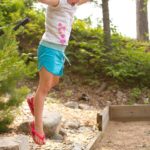 Kids can learn to exuberantly embrace the outdoors. 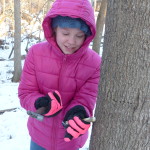 Savannah taps a homemade spile into a backyard maple.

Kids’ imaginations are powerful and given the chance, they will use them to create their own outside adventures.  Pretty soon you may just find yourself yelling out the door that it’s time to come in for dinner and hearing, “Aw, Mom!!  Just five more minutes!”