Are You a Weather Spotter?

Written about April 19 and 20 storms

“Well, two ugly storms in one week is enough for us for a while. Today has been full of dark clouds, winds, rain. Then as we
were sitting on the porch for a quiet read of the daily paper, I could see rapidly rotating clouds, some heavy rain and heard
a roar of the wind.

“I told Peter (spouse) that we needed to get inside. As we moved ourselves to the living room, I prayed that it would not come
our way. (In 2002 a tornado did set down on Kelso Mill Road not far from us.) Well, the funnel stayed about a mile west of
us, but what a mess. Fortunately, no one was hurt, but our friends were really shaken. Buildings down along with trees.
It was duly noted by me how fierce the wind was because the bark was stripped off branches and 200-year-old trees twisted
and shorn of their branches. Electricity was out because poles were down and the lines were broken.

“I called the electric company to report no electricity on Solaridge. The gentleman asked me my location which I told him. Then he
told me there had been a tornado, the crews were on their way and it would be a few hours before everything was back online.

“Because (at the time) Channel 13 didn’t seem to know for sure if it was a tornado, I called the National Weather Bureau to let them know what I had seen. I love the weather and clouds and have been a weather spotter for years since taking a weather class at CVCC. Anyway, Ben at NWB told me the investigators would be coming to Kelso Mill Road and Sharp Mountain Road to check the damage and make an assessment tomorrow which would be on the news Saturday night. I asked him to call me and let us know what their findings are.

“Well, that’s all the excitement for today. Like I said two ugly storms in one week is enough all ready.” 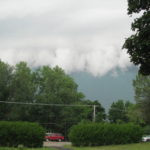 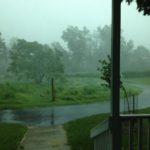 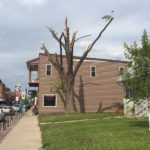 Years ago a tremendous lightning bolt struck a white pine at the Indian Creek Nature Center in Cedar Rapids, Iowa.

The powerful blast tore a vertical strip of bark from nearly the tree’s top to the ground. It was at least 25 feet long and about four inches wide. Fearing that the hit was fatal I called then Cedar Rapids City Forester Eric Faaborg who came out and examined the pine.

I was certain it had suffered the kiss of death, but Eric reassured me. “I don’t think the hit was fatal.   Give it a few years and see what happens,” he remarked.

He was correct. By the next year the pine had partially healed. Now about 20 years later it is healthy and has grown considerably. The scar from the lightning wound is still visible but has faded.

The massive white oak that was struck by lightning near our home at Winding Pathways isn’t as lucky.   Unlike the pine, the oak suffered extreme damage that extended all around the circumference of the tree.  Four vertical strips of bark were torn off, and where bark remained it had been blown away from the tree’s wood. Essentially the oak has been girdled. We expect it to slowly die.

According to Cedar Rapids arborist, Todd Fagan, lightning damage often stresses a tree, causing it to go into decline and eventually die. It also opens the tree up to insects and diseases. However lightning damage isn’t always fatal. If in doubt he suggests contacting a certified arborist to evaluate the tree. Or you can simply leave it in place and remove if it dies.

Fagan added that it is possible to prevent lightning damage to special trees. “Often trees on golf courses are fitted with a copper wire that channels lightning harmlessly down into the ground. It’s expensive but can prevent the loss of an especially valuable tree,” he remarked.

When the Power Goes Out! 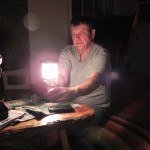 Battery operated lamps (left) are the safest to use indoors in the aftermath of storms. Be cautious if using propane lamps danger of fire and carbon monoxide poisoning.

On the evening of December 28, 2015 national news reported that thousands of people in the South are without power due to tornadoes that ripped through the region. The situation wasn’t much better in the Midwest where a howling blizzard also cut off electricity.

Many people are unprepared to ride out a week or ten days without electricity. Gathering a few emergency supplies and equipment can make enduring a storm much more comfortable. Every home should have them. While a preparedness kit  may not make it in a home destroyed by tornadoes, neighbors sharing their kits could be the difference between danger and safety.

Click on the PREPAREDNESS tab on this website to learn how to manage a power outage in relative comfort.

Got Cash? Money Talks In A Power Outage

Zombies and Ebola are all the rage and have people worried, but they are a less likely threat than power outages.

Massive storms, like this year’s East Coast Halloween Horror, that dropped up to a foot of snow in the Southern Appalachian Mountains and have caused power outages in the Northeast and curtailed transportation are the serious hazard people should prepare for.

Could your family ride out a couple of weeks without electricity following a blizzard, ice storm, or major flood? Or leave on a moment’s notice if a fire or even lava flow threatens? (Think California and Hawaii) Taking simple steps in advance will make enduring days without power and out of your home a relatively comfortable time.

Winding Pathways encourages families to  prepare for a big storm by  assembling a kit containing  easy to acquire and relatively inexpensive items like nonperishable food and water, and things most people never think about – like having a stash of cash on hand.  Remember, credit and debit cards don’t work without electricity. A backup heat source that doesn’t require electricity keeps pipes and people from freezing should a power failure knock out the furnace.

This is the time to get ready for that weather emergency. For details check the Winding Pathways Blog on Preparedness . It includes detailed tips for disaster preparation.