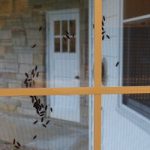 All this winter box elder bugs have gathered on warm sunny sides of homes.

Lots of box elder bugs are traipsing through homes this winter to the consternation of human occupants.

This amazingly common and crafty insect is a true bug named for common box elder trees. You don’t have to have box elder trees nearby to “enjoy” visits by the bug. Maple and ash trees of several species make a suitable hosts. Since these trees are everywhere in suburbia it’s no wonder box elder bugs pester so many people. Box elder bugs make their living feeding on tree seeds and sap but they don’t pose a threat to their host. Unlike the pests of many other trees box elder bugs don’t kill trees.

Come fall, box elder bugs prepare for cold weather by tucking themselves into bark crevices to patiently wait out the cold.  However, they would rather be warm and if a house is nearby they seem to  sense that soon the furnace will be going and indoors is the best place to overwinter,.

Although they are fairly large insects box elder bugs can crawl through tiny cracks and holes. Often they swarm in the sun on the exterior of a house and some manage to find their way inside. Winter is spent idly exploring light fixtures, furniture, and walls.

They are not really a serious pest. Pesky might be a better way to describe them. Box elder bugs neither bite nor sting. They do sometimes crawl on people and pets. Perhaps their most disagreeable characteristics are pooping and emitting a disagreeable odor if they are crushed. It’s this bad odor that protects them from predators. Hardly anything will eat a box elder bug.

Want to rid the house of box elder bugs?    The best defense is a caulking gun. Late each summer seal up cracks that allow them to squeeze into the house. Any found wandering around inside can be vacuumed up, and a shop vac can suck up hundreds sunning on the exterior. Dump them in soapy water and they’ll quickly drown. A hose can also knock them off an exterior wall. Insecticides kill them but perhaps insecticides create more problems than they solve.  Some people report that spraying box elder bugs with soapy water also kills them.

Box elder bugs aren’t harmful, but they are pesky and goofy.  Caulking up home cracks can encourage them to winter outdoors in trees, rather than inside with you.