Can a Chickadee Give Us Joy?

There is nothing that can surpass the natural ebb and flow of life passing by one’s window every day. The early morning symphony of spring birds creating their own composition of sound as each species awakens to another day. The goldfinches, chipping sparrows, Indigo buntings, robins, flickers, wood thrushes, chickadees, pileated woodpecker, nuthatches, downy and hairy woodpeckers, crows, hawks, catbirds and the unflappable mockingbird all announcing to the world that it’s a new day. Up and at ‘em!”

One particular morning after this grand symphony I noticed a chickadee zip into the mimosa tree near the back door. As he teetered on a branch, he seemed to be checking out the birdhouse attached to the side picket fence that surrounds our cottage garden. The chick came in for a closer look as he landed securely on a fence post. Then straight as an arrow, he went through the birdhouse entry for the final inspection.

Apparently the abode met with approval. Soon the male and female chickadees were padding the floor of the birdhouse with moss from the woods across the pasture. Diligently they flew to and from the woods with beaks full of moss. At one point my curiosity coaxed me to peek inside the box to view their progress. The moss-covered the floor and they had begun twining fine grass strands into a circle. One of the chickadees caught me and scolded me soundly for peeking. 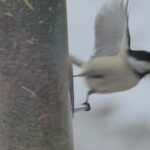 Mid-day that there didn’t seem to be much activity. As soon as the sun began setting, the chicks stepped up their construction. Again my curiosity pushed me to the birdhouse. I opened the door. To my complete delight, I counted six cream-colored eggs with soft brown speckles nestled in a perfectly round cup of grass. Of course, the chicks caught me again and proceeded with another scolding. I retreated to the back step.

Every day I waited impatiently for the hatching. The male came regularly with worms to share with the mate. He would give a clear whistle and then softly chat before he popped into the house. It seemed to me that this breeding process was taking too long. Once more I peeked. Six chicks opened wide their beaks and begged for food. This seemed like the last straw to the doting parents. They clamored about chattering at me. Again I retreated and watched from the back step.

This preparing the chicks for fledging began at dawn and continued until dusk, quite a marathon. First, one adult came with beautiful green worms to be popped into the loudest mouth. The adults always announced that they were coming as they hopped from crepe myrtle to post and always bull’s eyed the doorway. As quickly as they entered, they were gone to forage for more bugs and worms.

One morning several weeks later I noticed a chick teetering in the doorway. The chick quickly retreated because that nosy woman was at the back door again. Sensing I was on the inside looking out, he hopped onto the door lip. Within a matter of minutes, he flew out the doorway, trying desperately to cling to the slippery vinyl house siding.  In a twinkling of an eye, one of the adults was there to guide the fledgling to the butterfly bush. The chicks’ tail feathers were a bit short, but using every ounce of energy, the chick followed the adult across the yard into the wild rose bush. 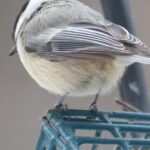 This was certainly a morning of the natural ebb and flow of life. If I decided to leave the back doorway, that moment would have passed me by forever. Such a glorious moment I would have missed. Within three hours the other chicks had flown away following their parents into the woods further down the lane. I could hear them chattering to the chicks and the chicks answering them. They have gone on now leaving me to ponder the wonder of life. It was a special event to have had this chickadee pair decide it was just fine to nest so near my back door.

I will always cherish the sheer joy it gave to me.