Too many people hate Canada geese. Once rare, this giant bird is now common across North America and enjoys living in town.

Geese were once uncommon rural birds, but starting several decades ago people began restoring populations in places where they were long absent. Our town of Cedar Rapids is an example. Nearly 40 years ago a few of the giant Canada subspecies were released in town. No one dreamed how successful they would be. Geese multiplied like crazy and now seem to be everywhere as they relax along the river or wing over downtown.

People dislike them because of the mess they leave on sidewalks, lawns, and golf courses. The expression loose as a goose is apt. Despite their mess, we find geese fascinating and love watching them, especially during our walks around Cedar Lake near downtown. 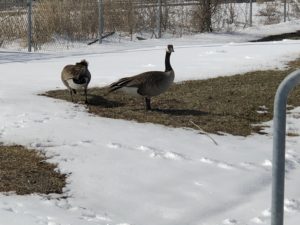 Geese pair up in late winter.

There’s much to admire about Canada geese. They mate for life and are devoted to their partner and babies, live many years, and have plenty of leisure to socialize and relax. Food is usually abundant. City geese enjoy eating lawn grass and the corn that spills from railroad cars.

Because geese are common, big, and unafraid of people they’re easy to observe.  Having knowledge of their annual pattern can help see them as fascinating animals rather than messy pests.

FEBRUARY AND MARCH:   Geese are now in pairs, rather than mixed in big flocks. Males and females show the same plumage, making it difficult to tell genders apart but usually, the ganders, or males, are slightly bigger than the females and have thicker necks. When we spot a lone goose in March, we know it’s likely a gander. Its mate is either laying an egg or incubating nearby but out of sight.

Goose nests are usually hidden, although sometimes one will be in plain view.   Normally it will be in a low spot near water, but we spotted a goose nest in an old bald eagle nest high in a cottonwood tree. Over a couple of weeks, the female lays a clutch that can have from just a few to a dozen eggs. When the clutch is finished, she’ll start a 35-day incubation period. During this time, she stays out of sight. People are most likely to see a lone goose, the gander, in plain view nearby.

APRIL:   Most goslings hatch in April, and the proud parents lead them to water.   Amazingly these balls of fluff can walk and swim when only hours old. Mom and Dad protect them from predators and people who approach too closely. Crowd a goose family and the parents will hiss and threaten. A big goose is intimidating but we know it’s mostly bluff.

Often several goose couples bring their goslings together, so we sometimes see as many as 25 or 30 babies intermingled in big groups. Adults seem to share parenting duty. 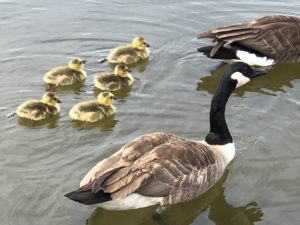 SUMMER:   Goslings grow amazingly fast and by mid to late summer are almost as big as mom and dad. They gradually develop their adult feathers and by late summer look identical to their parents and have learned to fly.

FALL AND WINTER:   When the grass stops growing our Cedar Rapids geese often leave town in the morning to fly into the country, where they snack on corn that farmers’ combines missed at harvest. They wing back in the evening and spend the night along the Cedar River or lake. Winter geese socialize in groups of 20 or 30. Should a hungry predator approach, the flock will make a racket and send it on its way.

Many Canada geese are migratory, although some stay in town all year. In the fall and winter, some individuals in a big group of geese may have hatched as far away as Canada, while others are locals. It’s during winter that young geese form pair bonds that can last for life. Usually the female determines where home is. So, if a Cedar Rapids hatched male goose takes a fancy to a young Canadian girl Canada goose, he will follow her north to nest, perhaps in Manitoba. But if a young Canadian boy goose pairs with a Cedar Rapids girl goose they’ll set up housekeeping here.

Geese are fascinating wild animals. Because they are amazingly common and easy to see they are one of the best birds to observe as they go about their annual pattern of life. 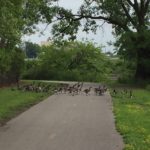 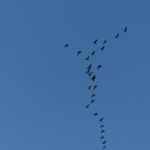 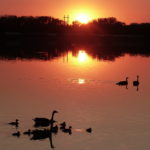 Adults and young on a lake.