Sometimes an animal’s name is misleading. Take the common nighthawks. It’s not a hawk and it doesn’t only fly at night. We often sit evenings on our back deck at Winding Pathways. In late summer 2022, we have been treated as dozens of aerial dancers – nighthawks – wheel overhead stalking mosquitoes and other insects. They can have all they can catch! 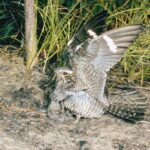 Common Nighthawks blend in with the ground. courtesy Free Photos

These birds are wonders. Closely related to whip-poor-wills, the brown feathers of the common nighthawk render them nearly invisible when resting in dry leaves or gravel during the day. They love evenings and wing overhead with their massive mouths open to snare tasty insects from the air.

Sometimes they pass just a few feet overhead. Occasionally they’re so high up that they are just fast-moving-turning-on-a-dime specks. Always they show distinct white stripes on the underside of their pointed wings. 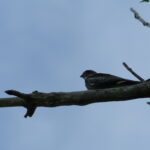 We watched dozens of them in September 2022 and know that like many other migratory birds, they’ll join other birds for winter quarters in South America, so we enjoy them when we can. Daily we track bird migrations on the birdcast.info site. Nighthawks are one of the most widespread of North American birds, visible over farms, forests, and cities.  Sometimes they even nest on gravel surfaced roofs of commercial buildings downtown and gravel areas of yards.  We’ve caught glimpses of them resting on tree limbs. Watch the video to see many characteristics of nighthawks – their flight, sounds (listen for the “boom” of their wings), resting habits like sinking into the ground and yawning, and toward the end of this mini-documentary -the “waddle.” Fun!

Unfortunately, nighthawks have been declining about 1% a year since the 1960s.  Why??? Pesticides, perhaps, reduce the insects that nighthawks feed on, and the loss of habitat. We don’t know for sure, but we enjoy watching their evening sky dance and hope people help them reverse their decline to continue their sky dance over much of the continent gobbling up insects.