Crinoids. Forsaken by the Iowa Legislature?

Sometimes blessings spring from catastrophes.  That happened years ago when a massive flood inundated Iowa’s Coralville Reservoir. Water overtopped the dam built to control downstream flooding. As the raging river gushed over the emergency overflow spillway it ripped soil from bedrock before invading downstream homes and businesses with gooey muck. When the flood subsided visitors discovered an amazing array of fossils in newly exposed limestone. Many were crinoids.

Just what the heck are crinoids?

You won’t find a living crinoid in Iowa today because our ocean abandoned the Hawkeye state years ago, but about 600 species still live in faraway seas. Fossils teach us that millions once thrived here.

Iowa was once a vast ocean where calcium wafted down through the water column as it formed limestone. Dig down nearly anywhere in Iowa and sooner or later you’ll hit limestone. Chances are that the rock contains crinoid fossils, the remains of the vanished Iowa fauna. In some parts of Iowa, especially Southeast Iowa, crinoid pieces make up a significant portion of the bedrock.

In what is now Iowa, those crinoids lived some 310 to 485 million years ago, give or take a few million years. They looked more like branching flowers than crawling, swimming, or flying animals we’re familiar with.  Although they appear plantlike crinoids are animals.

Why doesn’t Iowa Have a State Fossil?

Iowa can’t claim them exclusively, as crinoids are found in limestone worldwide.   Missouri honored this humble animal by designating it their state fossil. The Cedar Valley Rocks and Mineral Society has worked for years encouraging the Iowa legislature to follow the example of our neighboring state and name our common crinoid Iowa’s state fossil.

In this day and age when public opinion and political parties are leagues apart, one would think to designate these ancient Iowans as our state fossil would be nonpartisan and popular. So far, no dice from the legislature. Iowa lacks a state fossil.

To learn more about crinoids and other fascinating rocks, minerals, and fossils check out the Rock and Mineral Society’s Website.  Everyone’s welcome to attend their meetings and lend a voice encouraging the state to honor Iowa’s crinoids. 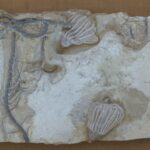 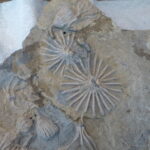 To form fossils of crinoids, sediment had to be deposited quickly. The sediment protected the crinoids from being disturbed. 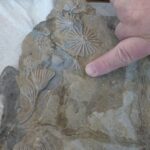 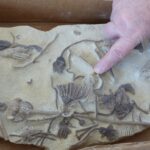 Millions of years ago crinoids covered the ocean floor.