“It was amazing! Gorgeous!  Fireflies danced over our prairie most of the summer, and they weren’t here when it was a mowed lawn,” said Katie Hill with much enthusiasm

She and her husband Tim are restoring an island of ecological health just three miles from downtown Cedar Rapids, Iowa. First Avenue is one of the busiest urban streets in Iowa, constantly filled with cars, motorcycles, and trucks. A bald eagle flying over the road would look down at an urbanized landscape – except for five acres of verdant beauty just a few feet east of the Avenue. The oasis is nestled between suburban developments, a high-rise condominium, and a senior residence complex.

Katie and Tim bought three and a half acres and a home about 15 years ago. It was convenient to his work at a law office a stone’s throw from their land. “We did the standard expected landscaping of mowing and spraying for about a decade,” she said.

Although the yard was large it lacked plant diversity and wildlife. Then came the change.

“We stopped spraying and I took delight when creeping Charlie and dandelions took hold. Many people don’t like them, but creeping Charlie has a gorgeous flower that bumblebees love, and it smells nice. Dandelions are beautiful, and bees love them,” she said. Then she broadcast prairie seed on a low area that had been lawn. After a couple of years big bluestem, Indian grass, and many native flowers appeared. Encouraged by their first prairie the Hill’s planted new ones in formerly mowed and sprayed lawns.   They’ve been helped by David Novak, owner of a small company that helps people restore natural areas.

“We were delighted when lightning bugs appeared over the prairie. They don’t like mowed lawn but love taller plants.  We watch them dance on summer evenings. These beautiful insects completely avoid the mowed lawns of our neighbors,” Tim and Katie remarked.

Early in 2018, the Hills bought about an acre and a half of land adjoining their property   Years before several houses stood on the property but it had been purchased by a developer who planned to build two condominium towers. He razed the houses and built one condo tower but abandoned plans to build the second.

As we walked through the area Katie showed us her new prairie plantings in what had once been a lawn while Tim pointed out where the houses had stood. As the years go by the residents of the existing condominium tower will gaze downward during the day on wildflowers dancing in the breeze and butterflies sipping nectar from prairie blooms. As twilight approaches, they’ll enjoy fireflies blinking their tiny lights.

In addition to creating beauty and feeling the joy of making the earth healthier, the Hills are benefiting the community beyond their property. Prairie grasses absorb stormwater that once sheeted off their land and into storm sewers and eventually Cedar Lake. Their land nurtures wildlife as its beauty increases and diversifies.

“We feel good about what we are doing. We are helping nature restore itself in the heart of the city, but it also does one other thing. When we were mowing and spraying it was costing us about $600 a month to maintain the property. Now that’s dropped to about 90 bucks, so we’re saving money,” the Hills explained.

In the process of restoring their land, Tim and Katie Hill are also getting a fulfilling ecological education. 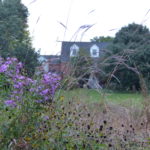 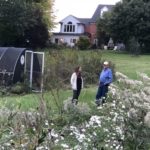 Butterflies have flocked to the Hill’s property. 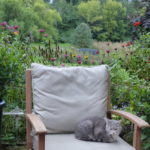 One of their many cats relaxes on the patio. 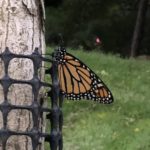 A Monarch perches in the lee of a tree resting before leaving for the south. 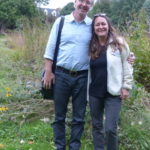 Owners of an urban oasis. 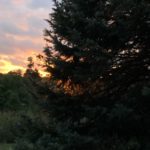