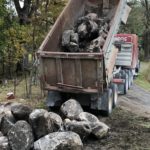 Our area of Iowa doesn’t have much rock. There’s limestone bedrock in some places. Over the top is a thick layer of subsoil and topsoil with one exception. Glacial erratics.

Thousands of years ago the Upper Midwest was a cold world. Summers were so frigid that the previous winter’s snow didn’t melt. It packed down on top of previous winter’s snow and formed ice. Thick ice is fluid. It moves. Slowly. But it moves. Up in today’s Minnesota, glaciers scooped up granite and other rocks and gave each one a grand, if pokey, ride. As the ice inched forward, often southward, it carried rocks. Often they churned along the bottom of the ice, gradually rounding off like pebbles in the ocean surf do.

Fifteen or twenty thousand years ago the climate warmed. Ancient climate change. Instead of expanding, glaciers shrank, leaving their stone cargo in place, often hundreds of miles from where they were scooped from the ground. 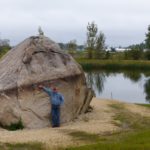 This massive erratic is the centerpiece of a new Marion, IA, park.

It’s complicated because there were several glacial periods of warming and cooling. Sometimes a new glacier picked up and moved rocks left by earlier ice sheets thousands of years earlier. The last glacier to visit Iowa melted about 12,000 years ago, leaving erratics here and there in the prairie that was converted to farm fields. Two of the most renowned glacial erratics in Eastern Iowa are Waldo’s Rock in Marion, and Bever Park’s boulder that generations of kids have climbed.

At Winding Pathways, we needed a retaining wall and first considered using manufactured concrete blocks. Then, we met Cody Rossman of Hardscapes. His business crafts glacial erratics into retaining walls. It’s not easy. Those hunks of rounded granite are heavy.

Cody’s crew brought truckloads of erratics to our yard from where the last glacier abandoned them near Troy Mills, Iowa. It took a husky truck about 45 minutes to bring the rocks 24 miles. That’s nearly 30 miles an hour.

It’s not certain how fast glaciers moved rocks, but it was slow. It could have taken years, decades, or even centuries for ice to move our rocks 24 miles. A speedy glacier might move a rock a mile a decade. Maybe a mile a century. Cody’s method was faster.

The wall’s in place. Every time we look at the rocks we wonder about their travel. Probably they originated in Minnesota hundreds of thousands of years ago to end up preventing erosion in our yard. What stories they could tell? Winding Pathways will find out in a few weeks when retired geologist, Ray Anderson visits and inspects the rocks and shares their stories.

Our wildlife also loves the rocks. A chpmunk popped up between two rocks as soon as the work crews left for the day. The uneven rock surfaces and the nooks and crannies between them provide safe living spaces for our chipmunks and garter snakes. 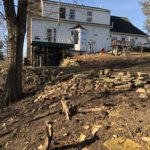 View of the old wall. 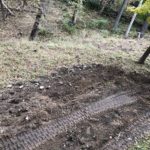 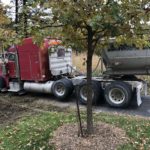 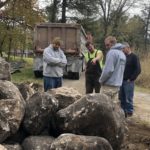 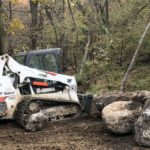 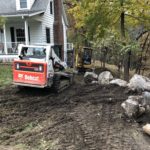 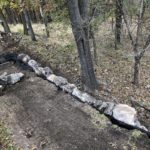 After excavating, geotextile is placed and glacial rocks arranged. 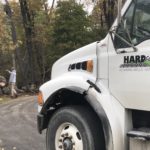 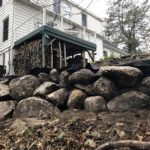 The rock wall is firmly in place. 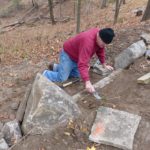 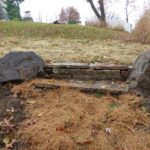 Milestone steps into the natural area. 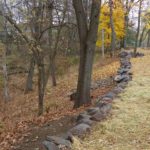