How Do Birds Stand On One Leg?

As we ate breakfast during the deep freeze that descended on February 7th six wild turkeys trudged through the snow from nearby woods and feasted on corn scattered under our bird feeders. It was 20 below zero – genuine 20 below. With the wind chill, the air was even colder. 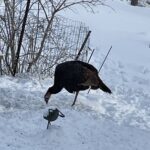 The turkeys each stood on one leg as they pecked corn. Every once in a while, they alternated legs. One leg was always holding the bird upright while the other was tucked in the bird’s feathers. We wondered how they do this, so we went to our favorite new bird book, David Allen Sibley’s, What It’s Like to Be A Bird. According to him, birds have several adaptations that make it possible.

Here’s what he wrote, “The center of mass on their body is below the knee and a knob on the pelvis prevents the leg from angling any higher. Balancing on one leg requires angling that leg so that the foot is directly below the body, and with the leg essentially locked in position, and the body leaning against the leg, tiny adjustments of the toes are all that’s needed to stay upright.”

We often wonder how ducks and geese keep their legs and feet from freezing when swimming in frigid water or standing on ice. They have a useful adaptation. A bird’s leg is high, muscled, and covered with feathers. What we see that looks like a naked leg is actually a modified ankle, containing bones and tendons yet lacking blood vessels. So, the vascular area remains warm beneath feathers as the bird stands on the ice.

We had the good fortune to chat with David Allen Sibley after he gave a presentation at the Outdoor Writers Association of America conference a few years ago. An astute ornithologist, writer, and artist, his books on bird identification and behavior, and his tree identification book, are always close at hand in our home. We’ve learned much from him.

Most bird species need to occasionally eat tiny pebbles. These end up in the gizzard, a powerfully muscled pouch, where pebbles act like grindstones reducing hard seeds into a slurry for digestion.

During periods of snow and ice birds have a tough time finding grit, so about once a week we toss grit beneath the feeders. Sand works, but we usually use fine and medium-sized grit sold to help chickens digest their feed. Once the snow melts there’s no need to add grit, as birds easily find plenty of natural tiny pebbles. 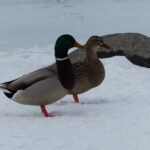 Adapted to the cold 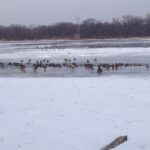