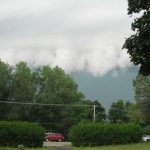 Thunderstorms carry the risk of wind, lightning and power outages.

The United States seems to have one storm season followed by another. The year starts with blizzard threats and then transitions into tornado season. That’s followed by hurricane season until blizzards again become possible in late fall.

Many people have prepared for loss of utilities caused by a huge storm. They have food, water, and emergency lights ready, but Hurricane Sandy revealed that many had forgotten one important modern survival need.

When Sandy shut down electrical service to millions of Americans cell phone companies turned on their back-up generators and the system continued to work. But, most cell phone owners had no way to recharge their phones and other electronic devices. Being unable to use their phone caused anxiety. After a few days many towns set up charging stations in public buildings powered by big generators, but to use one involved a drive and wait.

An outstanding item to add to an emergency pack is a back-up battery and emergency cell phone charger. Many solar powered chargers are on the market. Often they are marketed to backpackers and wilderness trekkers, but they work just as well in the city. Simply plug the charger into the phone and put it in sunshine and it will recharge the phone’s battery.

Another solution is to keep handy a back-up battery that will charge a phone. Many are on the market, and even cordless tool batteries often have a port that enables power to flow from the tool’s battery to the phone.  A spare battery will often recharge a phone a couple of times. Solar chargers are limitless but the sun needs to shine.

FOR DETAILS ON HOW TO STOCK A PREPAREDNESS KIT SEE THE WINDING PATHWAYS BLOG.