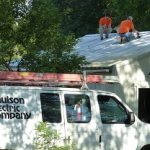 A few months ago Paulson Electric Company in Cedar Rapids, Iowa, did an analysis of our home and provided us with an airtight proposal. Thanks to tax credits from both the US and Iowa governments we could install a system that will produce about half our electricity without combustion, moving parts, or noise. We’ll receive at least a seven percent return on our invested money, better than we can do at any bank or the stock market.

Our system is net metered.  Sun hitting the solar panels produces DC electricity that inverters convert to AC. It flows through our electric meter. When we are producing more electricity than we’re using, typically on sunny summer days, our meter runs backward. When we’re using more than it’s producing – at night and during winter’s short days – the meter runs forward.  Each month we pay Alliant Energy, our utility, the net.

We love solar electricity. It takes some natural resources to construct and move the system but once in place it will last at least 25 years and continue producing electricity without burning fossil fuel or causing air pollution. And it saves us money.

Iowa is a national renewable energy leader with over 31% of  the state’s electricity being produced by wind or solar. Within four years it will be around 40%.  Our state isn’t alone. Solar and wind power are growing everywhere.  They are a way for people to enjoy the benefits of electricity without worsening climate change.

The windmill graphic on my Iowa driver’s license is a fitting symbol for the energy revolution sweeping the state.

Iowa may lack petroleum but has incessant wind and plenty of sunshine.  Harnessing these limitless resources seemed prudent and governments, utilities, environmentalists, manufacturers and nonprofits converged to position Iowa into its current leadership role in renewable energy.  “We had strong public policy and leaders like then governor Tom Vilsack (now US Secretary of Agriculture) who were interested in making it happen and worked with people to get it done.  Wind manufacturing was a target for economic development.  We added renewable energy training at community colleges and passed production tax credits to encourage small scale locally-owned wind and solar projects,” said State Senator Rob Hogg.

Today 31% of Iowa’s electricity comes from the wind and sun. It will likely reach 40% by 2020 propelled in part by declining costs of renewable installations.  In 1983 it cost 55 cents to produce a kilowatt of wind electricity.  Today it’s a nickel.  Photovoltaic costs, although higher than wind, are also tumbling.

Iowa’s renewable energy boom arrived with little controversy. Farmers receive royalty payments for each turbine on their property and about 6000 Iowans are now employed in the wind industry assembling turbines, constructing and maintaining wind farms, and providing equipment to support the industry. So strong has employment grown that Kirkwood Community College in Cedar Rapids erected a massive turbine that produces 24% of its electric consumption and offers an Associate Degree of Applied Wind Maintenance.     “Our graduates have been hired by many utilities and are now maintaining turbines all over the world,” said Tom Kaldenberg, Associate Vice President.

Van Meter Industrial is a wholesale electrical supply distributor.  “Five years ago we had one employee serving the photovoltaic market. Now we have five.  At least 47 Iowa companies are involved in the solar energy supply chain and at least 680 Iowans are employed in installing, marketing, and supplying the solar industry,” said Brad Duggan, Van Meter’s Renewable Energy Product Manager. 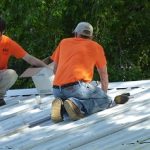 Workers begin on the roof installing the framework. They watch the weather for at least two consecutive days of low wind and no storms to complete this part of the job.

Wind and solar reduce the negative impact of burning fossil fuels. Once in place these renewables release no emissions to the atmosphere and don’t pull water from rivers or the ground.  There’s no need for dams to block fish movement and no concern about a nuclear catastrophe or mercury and acid raining down into lakes and the ocean.

There are significant economic and legal differences between wind and solar electricity.  Massive wind farms are owned by utilities and like coal or nuclear plants the utility produces and sells the power. To a consumer there isn’t any difference between buying electricity produced at a coal plant or wind farm.  In contrast photovoltaics and the electricity they produce are owned by individuals.

Wind often blows all day and night, while the sun only works the day shift.  To completely rely on solar electricity a homeowner needs a stand-alone system to charge batteries when the sun’s shining and yield electricity when it’s not.  Battery systems are expensive and normally only cost effective if a home is a long distance from the grid.

Increasingly common are grid intertie net metered systems where electricity flows both ways through a meter.  There is no power storage.   Essentially the grid acts as a battery.  When a home is producing more electricity than being used power flows outward to the grid, running the meter backward. At night electricity is pulled in and the meter runs forward. At the end of the month the utility bills the customer for the net amount used.

Over 20 years ago, while Director of the Indian Creek Nature Center, I acquired photovoltaic panels that Jimmy Carter erected on the White House and Ronald Reagan later removed and put in storage. I wanted to create Iowa’s first net metered photovoltaic system but there was no legal mechanism for a grid inter tie.  Fortunately my utility, Alliant Energy, was cooperative and helped legally and technically connect the system with their grid.   This led to a permanent legal mechanism that enables property owners to net meter either wind or solar generated electricity.

Although small our system cut the electric bill by 41% and the Nature Center is now constructing, with Alliant’s help, a new building that will produce more electricity than it consumes, a concept that can be incorporated into many structures. 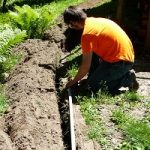 The wire is safely tucked inside this pipe. 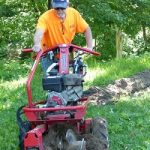 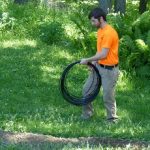 After the trench is dug, the coil is unwound and settled into the trench.

Because utilities don’t produce home or business generated solar electricity they face a dilemma somewhat akin to electric cars, where the owner uses roads but does not pay gasoline taxes needed to maintain them.  Utilities must sustain their grid but can’t sell electricity they don’t produce. Essentially net meter customers have free access to the grid.  Utilities are likely to eventually charge a grid access fee.

Economics are driving renewable energy expansion, at least in Iowa.  Cedar Rapids based Paulson Electric recently prepared a bid to place a photovoltaic system on our home.  For a cost of $13,150 a new system will produce 93% of our electric consumption.  We will receive state and federal tax credits of about $6312, reducing our cash cost to $6838.    The payback on investment is about 11.2%.  That’s far more impressive than the microscopic interest we receive from our traditional investments.

Renewable energy isn’t pie in the sky but In Iowa it has created significant employment while reducing environmental threats caused by hydro, nuclear, and fossil fuel.  It is a model that is expanding across the country and holds great promise for a cleaner future. 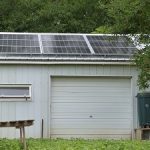