We like geese. Yes, they leave piles of poop on trails and urban grassy areas. And, that is a pain. We’re not fond of running the gauntlet of goose dirt on the sidewalk. Still, we like geese. They recently made us laugh with an antic we found hysterical.

While driving on Shaver Road, NE, near Cedar Lake in Cedar Rapids we spotted dozens of fluffy baby geese on a nearby lawn. There were at least 50 fuzzy babies watched over by only nine adults. All streamed across the road as fast as their little legs would take them and sprinted across a parking lot. It was a herd of fluff balls moving in concert. We were laughing so hard photography was difficult. Another couple had also stopped to watch and catch a video of them.

We often walk around Cedar Lake and always see geese, but May is probably the best month to watch them. Geese mate for life, so we usually see a pair of adults with anywhere from two to a dozen babies.

Here is why we like them. They’re attentive parents, teaching their babies how to find food and swim and keeping them safe. An adult goose is both formidable and a great bluffer. If we approach too closely they’ll open their bill and hiss. It’s clear communication that says, “Stay away from our babies.” We imagine that an enraged parent goose would drive off a hungry raccoon eyeing a baby for dinner. But, they don’t usually bother walkers beyond the hiss and evil eye routine.

One fascinating goose observation is that often several goose couples let their babies intermingle. It’s like a swarm of geese tended by many parents. Often the babies are of different sizes, so some must be older than others but the parents protect them all.

When we saw the 50 odd goslings with only four pairs of adults we wondered if they were operating a goose daycare, allowing other goose couples to have a few hours off from parenting duties.

Goose babies grow amazingly fast on a diet of mostly grass, and we’ll enjoy watching them mature as we do our regular walks around the lake. 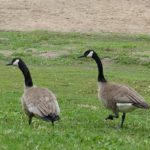 “Loose as a goose” is an apt expression. Many people dislike Canada Geese for their habit of depositing droppings on trails and lawns. Despite their mess geese are intriguing birds, especially if they are carefully observed. We enjoy watching them all year and love the goose music they treat us to as they wing over our home at Winding Pathways.

Young Canada Geese form pair bonds early in their lives and have high fidelity to their mate for what can be a long life together. Urban geese enjoy an enviable lifestyle.   They eat lawn grass and insects common in town and also snack on grain dropped from railroad cars and an occasional dying gizzard shad. Food is plentiful, and few predators pester adult geese. They have plenty of time for loitering and often socialize and rest with the flock in the shade on hot summer days or in the sunshine when the temperature is cool.

Geese follow an easy to observe pattern. In late February or early March, goose couples separate from the flock and can often be seen together. Males and females are identically marked. But the male ganders are usually slightly larger and have a thicker neck than their mate. Females make a nest sometimes hidden in vegetation on the ground and lined with a few sticks and goose down. Often their nest is on a muskrat house or another high spot. Sometimes they’ll even nest on a platform up in a tree. We’ve even seen one couple that became squatters in an eagle nest!

So, the nest can be hidden or very visible. It is usually near water. The female lays two to eight eggs and begins incubating once the entire clutch is complete. They hatch in 25 to 28 days, so most goslings appear in early to mid-April. 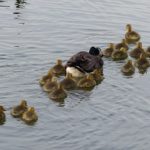 Goslings with the adult.

Geese are wonderful parents and defend their nest and babies from intruders. This includes bicyclists and trail walkers!  Geese spend hours teaching their babies how to find food and avoid hazards. Few raccoons, foxes, or other predators are big and bold enough to kill an adult, and mature geese aggressively protect goslings. They hiss if a human or dog approach too closely.

Baby geese grow amazingly quickly and by late summer are only slightly smaller than their parents but otherwise look the same. Following the mating season geese flock up in large groups of family and friends and stay together until next spring’s mating season.

Many geese spend their nights on and near urban ponds and rivers. Early each morning they fly to farm fields to feast on waste grain and grass. Often, they return to town in the late afternoon to treat humans to their beautiful call as they wing overhead. They are one of our favorite birds to see and hear at Winding Pathways.

Rich made a New Year’s resolution to walk around Cedar Lake at least 100 times in 2017 after making over 90 lake circuits last year. The 60-acre lake is near downtown Cedar Rapids, Iowa, and  features a 1.7 mile long paved trail following its shore. Every day pedestrians and bicyclists share the trail with Canada Geese.

“Lake circuits are always interesting, and many migrating water and shore birds visit Cedar Lake, but I especially like watching changes in goose behavior as the months go by,” Rich said.

Many people hate Canada Geese, mostly because of the mess they leave on the trail and lawns. But geese are fascinating animals. Closely observing them gives insights into their rhythm of life.

Geese live a long time. A quarter century is possible, which is a much longer lifespan than enjoyed by most wild animals. They pair up when young and mate for life. When a mate dies, the survivor often re-mates. Geese seem to enjoy plenty of leisure and like to socialize, and few predators bother them.

All winter they mingle in large flocks that are mostly big family groups of goose couples and their offspring. However, by early March the groups split up and human walkers around the Lake see mostly goose couples. They loiter near the trail, swim a bit, and forage on grass and grain spilled from nearby rail cars. In very early spring the female makes a simple nest on the ground. It’s hidden but if you see a goose pair in March their nest is likely close by.

Every day or two the female visits her nest and lays an egg before joining her mate for a day of foraging. Once the clutch of four to a dozen eggs is complete, she’ll begin a five-week incubation. During this time trail walkers only see single geese, and that’s likely the gander. He’s keeping a close eye on the hidden nest and his patient mate sitting on her eggs. Approach the nest and he will try to drive you away.

By the end of April, give or take a couple of weeks, the eggs hatch and for the next few months the parents protect and teach their youngsters. Baby geese, or goslings, grow fast and by late summer are full size and look just like their parents. For the next six or seven months they’ll stay with their family until it’s time to form pairs and begin the nesting process next spring.

Canada Geese are abundant and few urban wildlife sights are as pleasing to us as a flock winging over downtown at sunset. 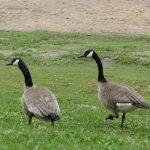 Geese pair up in the spring 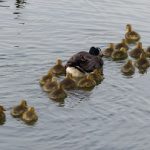 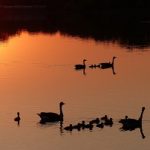