Take Time for Sunrises and Sunsets 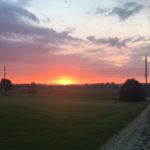 After working 40 years of my life, I was fortunate to be able to retire early.  Always a multi-tasker while I was a working mom, you can imagine that much of my spare time was, well, not really spare. I vowed early on that my children should not miss out on “mom time” because I was working. That meant that some other things had to give a little.  Like housework…that was easy

to cut. The only “extra time” I allowed myself before the family began to stir was a cup of coffee and a scan of the local paper WHILE I blow-dried my hair   But getting back to my original point: when I retired, I knew it was going to take a bit to adjust to my new normal of no schedule. I developed two mantras –the first, “Slow Me Down, Lord”, and the second followed “Take time, make time.”

Growing up on a farm I saw few sunrises mostly because I was already in the barn milking and there wasn’t a lot of extra time in those days. Milking 50 cattle morning and night…usually with only two people milking. You get the picture. 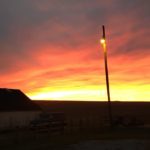 But, I saw lots of sunsets — mostly from a tractor. Back then we worked until it was dark, and sometimes later depending on the season. Still no camera handy. And if I did get a shot, I had to wait until the roll was full to get it developed. And usually, a few weeks for it to come back not to mention the trip to town to drop it off and pick it up. It was a real thing.

When we first married my husband and I enjoyed small town living but that involved a 45-minute commute to work and little extra time to catch the sunrise. Even when we moved to the country 27 years ago, I was still up early and getting ready for my day. We had the perfect spot — on top of a hill facing East-southeast. But until I retired I was hit and miss on taking the time to actually catch the sunrise.  And then, I didn’t always have a camera at the ready, so very few were ever captured.

Fast forward to my retirement years. I now have hundreds (maybe thousands) of pictures of sunrises and I am so glad I can share those with others who may not have the time or the perfect location to view these masterpieces of creation. While Facebook has its drawbacks, being able to share a sunrise photo instantly is definitely a plus. 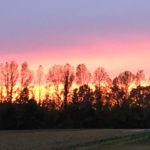 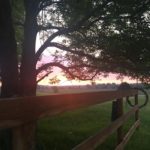 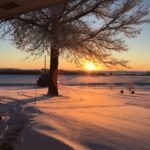 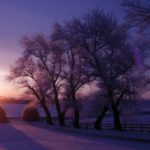