The Continuing Saga of the Ninja Chicken

Well, our Ninja Hen is at it again.  A neighbor, watching the hens for us, entered the barn one morning to find the California White strutting around inside the barn but out of the coop! Looking around, our neighbor also found a small white egg in a depression in the sand in a tucked-away corner of the barn.

After some coaxing, Ninja Chicken hopped back into the coop through the door our neighbor had opened.

You may remember an earlier blog where we explained that Rich had blocked off all the areas he could see where she might be able to fly up to and escape into the barn.  All was well for several weeks.

Meanwhile, Houdini Hen (aka Ninja Chicken) was figuring out how to “fly the coop” so to speak.

And she did. One morning, we too, found her again proudly prancing around the barn. She looked at us and seemed to say, “Haha.  You can’t keep me in!” But, she could not quite figure out how to get back into the coop.

How in the world did she escape?

We looked around and found over in a far corner another gap between the chicken wire and the ceiling. The wire was bent down so we speculate that she worked at bending it when she landed on the wire and eventually had enough space to squeeze through and roam the barn at will laying eggs in that cozy little corner. The wire is straightened and the space is now plugged with plywood. Will she figure out another way to escape? We’ll know in the next few days. 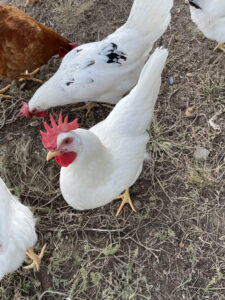 This hen continues to teach us something. Chickens are not dumb clucks. This girl used intelligence to find an exit and demonstrated amazing athletic ability getting to and through a relatively small hole up high near the ceiling. And she is first in line for snacks, too.