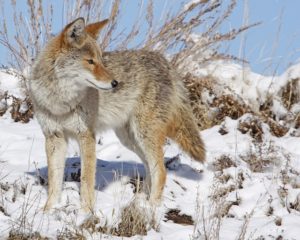 At 2 a.m. one frigid February night we were startled awake by coyotes yipping and yapping right behind our house at Winding Pathways. The next morning, we discovered their tracks all around our snowy yard. It explains why we haven’t seen many cottontail rabbits in recent months.

The amazingly adaptable coyote has spread to many parts of the United States.  Most Americans might not realize it, but they live close to these efficient predators. In towns and cities, coyotes are most active at night, stay out of sight and are usually quiet.  In rural areas they’re more likely spotted in the daylight and often vocalize at night.

Coyotes are amazingly successful predators. Adaptable and intelligent, they are common in Los Angeles and have been spotted in New York’s Central Park. A pair successfully raised young in a culvert near Chicago’s Soldier Field. Once only found in the rural West they are now common all the way to the Atlantic Ocean and thrive in deserts, forests, farmland, towns, and cities.

Although coyotes will eat birds, they don’t target them and consume few. Numerous studies have shown that when coyotes increase foxes and raccoons decrease. Since these two smaller animals are the major bird and egg predators, an increase in coyote density often means more birds in the area. Anyone who likes pheasants should appreciate coyotes.

Coyotes pose no threat to humans. They thrive on a continent where people have eradicated mountain lions and wolves from most places where they once lived.

After a newly fallen snow do some backyard tracking. Wherever someone lives there is a chance of finding the doglike tracks of coyotes that worked the neighborhood the previous night.

This blog is similar to one that Winding Pathways wrote for the Cedar Rapids GAZETTE.