What Do You Do About City Ducks?

In mid-April, we got a call from a concerned Montessori teacher. Her school is in downtown Cedar Rapids amid office buildings, restaurants, and taverns. Cars constantly buzz by.

She’d spotted a hen mallard duck nesting in the school’s playground and asked what she could do to help it. She knew what a great teaching opportunity this was. Children and teachers have spent the past several weeks observing and documenting the mama Mallard. They even named her – Mallory. Her partner is dubbed Howard.

Over the years we’ve fielded many similar calls from people in urban areas spotting nesting mallards and Canada geese.

For years people have heard that transforming natural areas to cities and suburbs destroys wildlife habitat. It does, at least for wildlife that shun people. However, many wild animals increase as an area urbanizes. House sparrows, rats, and pigeons come to mind, but some other beneficiaries are more welcome.

Cedar Rapids is bisected by the Cedar River, and many ducks nest downtown. Often a hen duck will nest in a large raised concrete flower pot, or as the Montessori School discovered, in the kids’ playground. 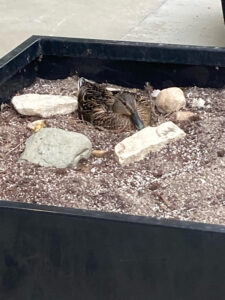 This female mallard is quite at home near the Montessori school.

Although this may seem odd, a city may be the safest nesting place. Mallards nest on the ground. Raccoons, dogs, opossums, and a slew of other predators love dining on eggs. Most duck nests out in the country get predated. All that’s left after a raccoon raid is eggshells. Fortunately, many waterfowl species renest, and usually enough nests are successful to maintain the population.

It may be that a nest in a raised concrete flower pot reduces the odds of a raccoon raid.

For many years a duck nested under a shrub near the front door of Washington High School. The hundreds of students who passed by the nest may have discouraged predators.

Canada geese also aren’t shy about people, factories, railroads, or even Interstate Highways. Many nest along Cedar Lake in an industrial area of Cedar Rapids.   Normally they hide their nest, but we found one goose nesting immediately adjacent to a busy trail in plain sight.

This bird is now so numerous in many cities that they’re considered a nuisance, although we love seeing and hearing them.

So, what should someone do if they find a nesting duck or goose in a seemingly unlikely and unsafe place? The answer is simple. Just like the Montessori classes, Leave it alone, take photos, and enjoy having a beautiful and interesting animal make its home near people.