Authors’ Note: Below are replies from folks who attended country schools.  Some stories originally appeared in the Cedar Rapids Gazette.

“Many older people have fond memories of attending the typical one-room school. The image is quintessential often with a painting of George Washington and Abraham Lincoln up front, a row of wooden desks, a potbelly stove in the back, and a privy or two outside. Although the facilities were humble, memories linger in the minds of older people who launched their learning careers in a tiny school.

“I remember the Veteran’s Day Blizzard of 1940. It was a beautiful morning but clouds moved in and soon the wind howled outside Flanagan School. We had a car by then, but Flanagan School was on a dirt road. Dad thought the car would founder, but that the horses might get through,” said John Regan who attended the one-room school between Holy Cross and Rickardsville in Dubuque County.

““My teacher was Miss Regan, Dad’s cousin. She was wonderful and in that small building I learned education basics,” continued Regan.   He went on to serve a successful hitch in the Army, repaired typewriters in New York City, and emerged as a dealer of John Deere equipment in Newton, NJ, and ended up as an executive VP. He now lives in a New Jersey senior residence but often reminisces about his Iowa childhood.

Quality of Teachers and Cooperation of Parents

“Idahoan, Bob Pratt, Rich Patterson’s former college roommate, drawled, “I didn’t go to a one-room school. Mine was a two-roomer.” He added, “Grades one through four were in one room and five through eight in the other.” His school was in remote Idaho and had only three employees: two teachers and a person who was both cook and custodian. After eighth grade, Pratt attended a tiny high school. After earning his teacher’s certificate, he devoted a career to teaching practical farming and mechanic skills in equally tiny schools in rural Idaho.

“Both Iowa native Regan and Idahoan Pratt enthusiastically agreed, “The education I received in tiny schools was superb. Maybe better than I’d have had in a big school.  My classmates and I were well prepared for college and successful careers in many areas.”  Pratt continued, “I taught in high schools with just a few students in each graduating class, but they went on to great success.  One is a cardiac surgeon.  Another is a skilled cabinet maker. It’s the quality of the teachers and the cooperation of parents that make students excel, not the size of the school,” he emphasized. 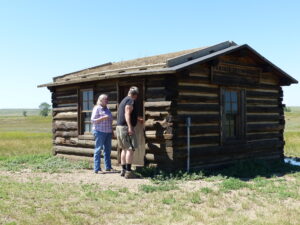 Betty and Rich check out the small school house on the American Prairie Reserve in Montana. 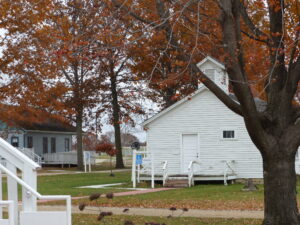 “Friends we know in the Cedar Rapids, Iowa, area share similar stories, emphasizing that one-room school education worked for them. The side stories add richness to their experiences. One friend recalled her mother getting a piggyback ride to school after losing her boots in the mud. Pam Tegler Geraghty, a retired special education teacher in Cedar Rapids admits to being a “holy terror!” as a kid at the Lamont, IA, school in the mid-1950s. Slopping in the creek on the way home and locking a classmate in the outhouse among her antics.

“Pat Maas a retired teacher and health secretary at Grantwood Elementary in Cedar Rapids, remembers the students running outside to see an airplane overhead in the 1930s, back when planes were new.” 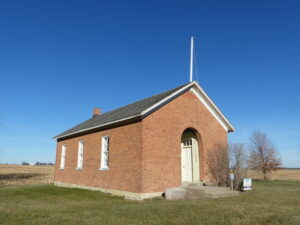 We sat on the stoop of took in the memories of by-gone days. 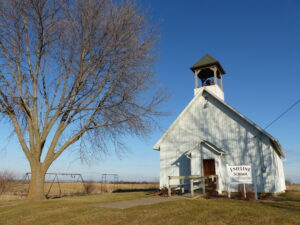 If other readers have other stories of one-room school experiences, we invite you to share them so we can appropriately add to them. Learn more about country schools in Iowa and across the nation.