Why Do Millipedes Always Lose Races? 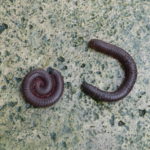 Many people discovered one of the oldest types of animals in their yards and homes this year.  Millipedes. Usually common they have been especially visible in this humid rainy summer and fall.

Millipedes have been around for millions of years doing the world a service. Biologists call them detritivores, which simply means they eat bits of decaying leaves, grass, feces, and other organic matter found nearly everywhere. Scientists call dead material of many origins detritus. To millipedes it’s dinner.

About 12,000 species of millipedes live around the world on all continents except Antarctica. They range from about a quarter-inch to several inches long and most are brown or black. All have two pairs of legs on each body segment. Since they have many segments millipedes have enormous numbers of legs stretching down each side of their body.  That doesn’t make them speedsters. Millipedes creep along.

Few animals are as harmless as millipedes. They can’t bite or sting. When threatened millipedes roll up in a ball and play possum, but normally they avoid predators by hiding in detritus or under rocks and logs. Snakes, amphibians, and birds enjoy snacking on them.

Millipedes are sometimes confused with centipedes, but they are distinctly different.  Millipedes are sluggish consumers of dead plants while centipedes are swift predators.   Both enter homes through cracks and holes in the walls or gaps in doors and windows.   Caulking is an effective way to keep them outside.

Millipedes may seem creepy to some people but they have survived for millions of years recycling dead plant material into humus. They deserve our respect. 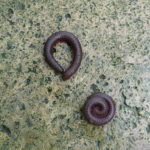 Can you count the millipede legs?

Answer: Millipedes take so long to lace up their shoes that the race is over by the time they finish.