We’re lucky to have a pair of bald eagles nesting within walking distance of our home. Occasionally we clamber through the woods to check on the couple, but we’re careful to not disturb them. We stay a hundred yards away from their nest tree and spy on them through binoculars.

On March 12 Rich witnessed a remarkable trait of eagle parentage. Incubation is a female task with most birds. The male rarely sits. Not so with bald eagles.  The soon-to-be father helps keep the eggs warm. Rich happened to be near the nest during the changing of the guard. 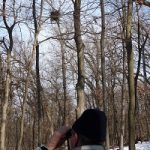 Watching from a distance.

He could see just the white crown of the sitting eagle’s head protruding from the huge nest built high in a white oak tree. Its mate perched on a limb about 50 yards away. Suddenly the sitting bird climbed off the eggs, spread its wings, and began circling the nest. Its mate joined the circling.  After a few revolutions around the nest the recently sitting bird made a beeline north, presumably to look for dinner. The remaining eagle circled a few more times before settling down on a branch near the nest. After a minute or two it hopped into the nest and settled down over the eggs.

Who was who? Male and female bald eagles look alike, so Rich couldn’t tell if the male or female was the first incubator. It doesn’t really matter. Cooperation between the two is fascinating as this link shows.

Eagle parentage is an exercise in teamwork. The pair built the nest, take turns incubating, and both hunt for nestling food. 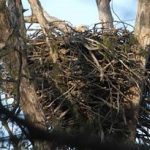 Eagle nests are becoming more common everywhere. The birds mostly feed on fish, so likely nest locations are near rivers, lakes, or the ocean. Nests are enormous piles of sticks, usually high in a tree and easy to spot. Bald eagles don’t seem bothered by roads, stores, or houses and often nests are within sight of heavy human activity.

Find a nest, dress warmly and sit some distance away with a pair of binoculars. You’ll be treated to examples of outstanding parentage.  We plan to spy on our local eagle pair from a distance through the 35-day incubation period and as they raise their chicks.