Have Your Seen a Calf Being Birthed?

A couple of times a year we drive to and from New Jersey to visit relatives. It’s a long thousand-mile slog each way, but we recently discovered an amazing driving break……watching a calf being birthed.

Our fastest route is following Interstate 80, but that involves running a traffic gauntlet in northeast Indiana and paying tolls and boredom along the Ohio and Indiana Turnpikes. On a recent trip, we took a more southern route, mostly following secondary roads to avoid tolls and traffic. Never would we have imagined that, on a driving break, we’d watch a birth!

Yup. A birth. We’d been following smallish roads across the Hoosier State and had vaguely heard of Fair Oaks Farm. As our car cleared a rise by an enormous farm field we spotted their colorful water tower and stopped in. It’s really not a farm…but then again it is. Mostly it’s a fascinating living museum of American agriculture, focused on dairy, pork, and crops combined with a hotel, restaurant, and gas station. 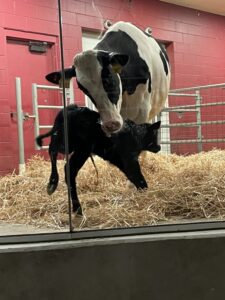 After checking in we entered the birthing barn to take in an amazing sight. Two Holstein dairy cows were giving birth, with a human attendant attentively watching to help as needed. As we sat with other families in the darkened seating area, two hooves emerged from each cow. One gave birth quickly. The other struggled until the attending woman helped by gently pulling the calf from her. We, and many others watching, were riveted by the real-time arrival of new living animals. This event brought to mind Marion’s experience growing up on a Maine dairy farm watching a calf being birthed. 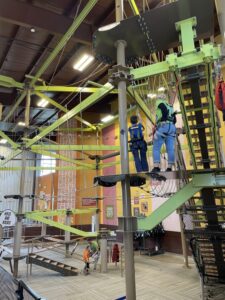 At Pig Adventure we encountered a couple with two small children. “We were on a long drive from Indianapolis to Chicago. The kids were restless in the back seat. So, we stopped. Look at them now,” declared their mom. A young boy and girl were testing their balance on a large complex obstacle course sort of like we see on TV’s American Ninja Warrior. They were harnessed in and guided by employees. Thrills and exercise, yes.  Danger, no.

As a seasoned museum professional Rich was impressed at how exhibits were accessible for walking-challenged folks with plenty of places to sit and rest. Yet they gave kids a chance to burn off energy as they moved from exhibit to exhibit. For example, kids could climb small “hills” and slide down the other side to see new displays. One boy operated a hand crank to move large constructed kernels of corn up a vertical elevator to drop into a “silo” and back down for kids to repeat the process. Great learning combined with physical activity. It was, for the family, an educational and exciting way to burn off energy.

We are far from being kids but we gave the crank some turns, also. Then we took a tour break and enjoyed lunch at the site’s eatery, called the Farmhouse Restaurant.  As we dined, we watched cheese being made behind a huge glass wall.

We could have boarded a shuttle bus to see actual dairy and pork operations nearby or walk to the orchard and pumpkin patch but time was pressing. We needed to hit the road. So, we will be back. 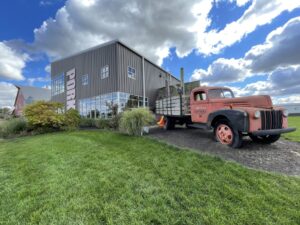 Fair Oaks Farm was the dream of Mike and Sue McCloskey who began creating it in 1999. It opened a few years later and new exhibits – actually agricultural adventures – are regularly added. Today about 275 staff host thousands of people every year. Jobs for local teens, parents, and grandparents as they warmly welcome visitors.

It’s not all pigs and cows. Many people visit the orchard in the fall to pick apples or the pumpkin patch to stock up on the orange globes for Halloween. Later in the season, there’s ice skating, a forest of lights, and even igloos to enjoy.

The Farm is just off Interstate 94, which links Chicago and Indianapolis. Anyone driving East/West might consider taking smaller roads that parallel Interstate 80 for a less stressful drive that leads past the Farm. For information check out fofarm.com.