Can You Hear What I Hear?

Sometimes change happens as quickly as flipping a light switch. One moment it’s dark. A second later brightness fills the room. Other changes creep up so subtly that it’s hard to notice them at all.

That’s what happened to my hearing acuity. It probably started years ago when massive machine gun noise assaulted my ears during Army training, and running chain saws, lawn mowers, and other machines didn’t help. Gradually and pretty much unnoticed I developed tinnitus and lost the ability to hear many of nature’s delightful sounds. 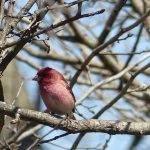 Rich could not hear the sweet sound of the finch.

One day my wife, Marion, and I were sitting in the living room when she asked, “What bird is calling outside the window?”  I couldn’t hear a thing! It was time to get my hearing checked and a few days later I was at Heartland Hearing Center in Cedar Rapids. Audiologist Jennifer Reekers positioned me into a small booth and tested my ability to hear sounds of varied intensity and wavelength. The test proved what I already knew. I could not hear many sounds well, especially high pitches.

“Hearing aids will help restore your ability to hear many sounds,” she said. Over the next few weeks, she fitted me with a different trial pairs until I found one that did the trick. It was in spring and I could hear bird calls I hadn’t heard in years. Some sounds were odd, like hearing my own footsteps and my pants legs swooshing together as I walked.

My experience with the aids has been positive and, although they were expensive, it was money well spent. In the Premier section below is an article on the causes of hearing loss and how to improve hearing. It includes tips to protect hearing before loss sets in and what can be done to enable better sound detection and is reprinted from OUTDOORS UNLIMITED Magazine.

Humans are fortunate. We have a fair ability to see, hear, taste, and smell. The senses of many wild animals have senses much better than ours, but they usually aren’t as well balanced. 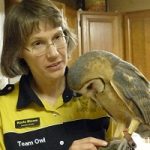 Barn owls can find prey in complete darkness using only their hearing.

For example, according to Karla Bloem, Executive Director of the International Owl Center, a barn owl’s hearing is so keen that it can detect and catch a mouse in complete darkness. Its vision is also outstanding, although probably only in black and white. But, that owl may not have a sense of smell or taste at all.

Like owls, wild turkeys have outstanding vision and hearing but probably no sense of smell or taste.

The sense of smell and hearing possessed by deer is amazingly well developed, but their vision isn’t very good. Humans are fortunate to have all our senses, although none of them may be as keen as those of certain animals. Hearing loss can often be prevented.   Take care around loud noise.

“This article first appeared in OUTDOORS UNLIMITED, a publication of the Outdoor Writers Association of America and is re-printed with permission.

“As the gunner fired bursts, my hands guided belted ammo into the big Browning machine gun.  The noise was so intense that concussions jarred my skull.

“Military noise, augmented by youthful years in small planes, running power saws, and hunting eventually caught up with me. By my 40th birthday my ears started buzzing. Called tinnitus, noisy ringing has been part of my life for decades. 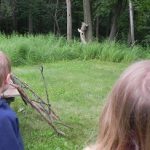 Children’s voices were lost to Rich.

“Gradually it became harder to hear some sounds, especially the high pitch speech of girls. Conversing in a crowd became maddening as I could hear background conversation but not the person in front of me. Eventually wood thrushes and my wife’s expressed concerns convinced me to shun procrastination and seek help. No sound in nature is as magical as the springtime notes of this woodland bird. Several years ago I heard my last thrush. Either they were absent from the woods or my progressive hearing loss blocked their music.

“Studies link hearing loss with depression, dementia, falling, high blood pressure and anxiety but, it was the inability to hear birdsong that launched my search for a solution. I’m not alone.  At least one in three people, men and women alike, over age 60 suffer hearing loss. Unfortunately many fail to seek solution.

“Hearing loss is nondiscriminatory. Cumulative noise exposure impacts people of all ages and both genders. A current concern is high volume music from ear buds.  As many as a fifth of teenagers may eventually suffer hearing loss from it.

“Advertisers know this, and when my 60th birthday passed I began getting bombarded with hearing aid ads. Some claimed cures for tinnitus and most offered better hearing at bargain prices. Most sounded too good to be true.  I decided to seek a certified audiologist and within a week was sitting in a quiet booth as Jennifer Reekers of Heartland Hearing Center tested my ability to hear.  It yielded no surprises but was disconcerting.  I couldn’t hear high pitches.

“Jennifer holds a doctorate in audiology. She and her business partner, audiologist Diana Kain, patiently answered questions and convinced me that I was not just about to buy hearing aids but was beginning a long term relationship with professionals committed to improving my hearing. They fitted me with a trial pair of hearing aids appropriate for my non-typical lifestyle.

“Usually I work at my computer a few hours, then run a power saw, then back to the computer, then target practice with my .22 rifle.  I’m outside in wind, rain, blizzards and other quirks of nature. Sometimes I need to amplify sound then suppress a saw’s roar or a rifle’s bark. 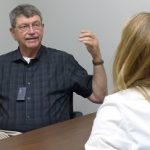 “Jennifer used marvelous technology to adjust the aids to fit my needs. They aren’t merely amplifiers. They are computers enabling aids to fit varied needs. Jennifer manipulated her computer while tuning my aids to dampen tinnitus and background noise while boosting my ability to hear high pitch sounds.

” The following day I hiked seven miles in Effigy Mounds National Monument amid calling orioles. As I sat on a bluff over the Mississippi the delightful song of a wood thrush filled my ears.

“An important feature of my new aids is a tiny mute button. Just before I pick up my power saw or .22, I mute the aids and slip quality muffs over them. The mute function eliminates the hassle of removing hearing aids before noise exposure. 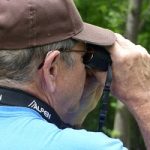 Hearing and locating birds got easier with hearing aids.

“I spent a week trying everything I could think of to frustrate the new hearing aids before I decided to buy them.  I went out in the rain and wind and even evicted a black fly that had crawled into my ear.  The aids stayed in place and kept working. I couldn’t shake them out.  They were comfortable, even after 14 hours and amazed me. One afternoon I rowed to the middle of a smallish lake and could clearly hear bank anglers conversing.

“Expensive!  Yes, but being able to hear a thrush and converse with the neighbor kids is priceless. The cost didn’t just buy hearing aids. It established a relationship with the audiologists who are my hearing coaches.  I can access them at any time at no additional cost. They’ll tune and clean the aids as the need arises.

“Licensed professional audiologists have a higher degree of training than hearing instrument specialists or hearing aid salespeople and have access to a wide array of hearing aids.  Jennifer and Diana have helped me recapture my hearing and their peers can likely help many of the millions of Americans who suffer hearing loss.

“Hearing loss is a stealth condition.  Exposure to loud noise is cumulative and gradually permanently degrades hearing. It is the root cause of tinnitus. Correction is outstanding for those of us with hearing problems but prevention is far better. Loud music, lawnmowers, saws, blenders and vacuum cleaners, and especially firearms cause hearing loss that can be prevented.

”  Here are recommendations from Audiologists Reekers and Kain: